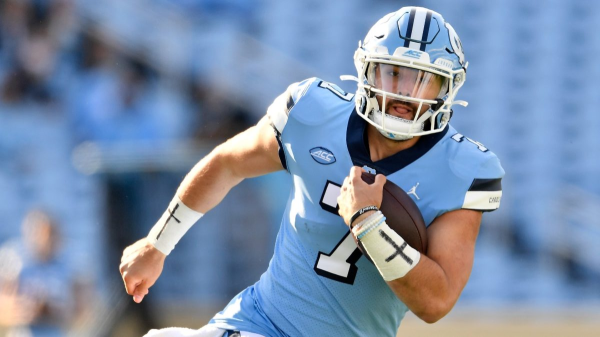 Notre Dame will be coming to this game with an unbeaten 8-0 streak, while North Carolina comes with an overall 6-2 record. North Carolina is looking to shift the existing balance of power in the ACC at Friday’s game. The 25th ranked North Carolina team dropped a heartbreaker in Virginia and have enjoyed back-to-back wins over Wake Forest and Duke, while Notre Dame is showing up after beating the number 1 Clemson Tigers.

Notre Dame is currently ranked number 2 in the country and sits at an 8-0, 7-0 scoreline in conference play within the ACC. Despite not playing in Week 12 because its last game was against Boston College on November 14th, no one would forget in a hurry how the team took down Boston College by the final score of 45-31 and is the only team this season to beat the previously undefeated Clemson Tigers.

Of course, the team has a fantastic opportunity to make it to the playoffs in college football. Notre Dame averages 37.6 points per game and receives per contest 462.3 total yards. Also, the defense has been in top form this season, allowing just 16.6 points per game and giving its opposition 304.1 total yards of offense. However, in this game against North Carolina, the team would need to work for its ninth win because they are facing a team that has a reputation for scoring.

Some players would be out during this match, like the team’s offensive guard, Tommy Kraemer, who would be out following an appendectomy, and Jarett Patterson, who injured his foot during the game against Boston College and would be out for the rest of 2020. There is also the team’s leading rusher who was injured in the game against Boston, although he is expected to play against North Carolina in this upcoming game. Additionally, the team’s Quarterback, Ian Book, will get a chance to play a solid role in a game that could become an offensive shootout.

Notre Dame is not exactly known to mount sufficient pressure on opposing quarterbacks and is currently ranked 12th in the ACC when it comes to interceptions, and this can cause problems for them, considering that the Tar Heels have a reputation for running up the scoreboard. They have a high-flying attack system and are currently ranked 2nd in the third-down offense in the ACC.

Will North Carolina topple its opponent?

With Howell Humming just behind the center, there is not a team in the ACC that could not lose to the North Carolina Tar Heels. Their passing offense comes 2nd to only that of Clemson’s. However, while they have a solid offense, their defense needs to step up if the team is going to be formidable against an unbeaten Notre Dame.

Just like their competition, North Carolina did not play in Week 12 because they were on their bye-week. The team currently plays under Head Coach, Mack Brown and with a 6-2 win under their belt, they are in an excellent position to win too. Their last game against Wake Forest proved this, as they defeated their opponents with a final score of 58-53 in an offensive shootout. This season, the team has an average of 43.1 points per game and has allowed 30.8 points per game.

Notre Dame is the clear favorite to win the game. However, all season long, this team has not faced an offense like that of North Carolina. Clemson, their toughest opponent yet, did not have one of their star players, Trevor Lawrence, on the field during the Week 10 game. While we expect Notre Dame to win, we do not expect the North Carolina Tar Heels to make it any easy for them.