Northwestern Can’t Hang with the Buckeyes 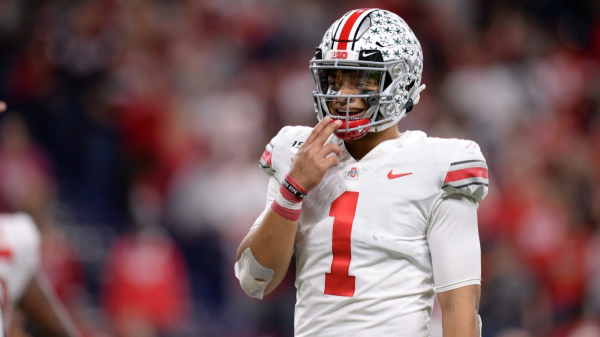 This Saturday the #15 ranked Northwestern Wildcats (6-1) take on the #3 ranked Ohio State Buckeyes (5-0) in the Big 10 Championship game. With a win, OSU would cement themselves in the College Football Playoff, while a loss would ruin their undefeated season and potentially their hopes of a National Championship.

Northwestern enters the game as one of the best defensive units in the country. They are currently 2nd in scoring defense allowing just 14.6 points per game. They are also a top 25 defense against the run and the pass, as teams have struggled to move the ball against them all year. No team has thrown for 300 yards vs the Wildcats and they have only surrendered 2 rushing touchdowns in 7 games. This defense is locked in, and it will be a great matchup against the high powered Ohio State offense.

The Buckeyes have the 4th ranked scoring offense in the country putting up 46.6 points per game. They are extremely balanced on this side of the ball toting the 7th best rushing offense and 6th best total offense averaging 532 total yards a game. They have scored 29 offensive touchdowns in 5 games, 15 passing, and 14 rushing, demonstrating their balance.

The weakness of the Buckeyes is their pass defense. They rank 111th out of 127 teams in the country in terms of yards per game. The argument could be made that because they are ahead, teams are forced to throw more than usual, but OSU will need to sure up their secondary if they want to make a run in the playoff.

The good news for the Buckeyes is that the Wildcats won’t be the team to take advantage of that weakness. QB Peyton Ramsey averages just 174 passing yards per game, and Northwestern ranks 106th in terms of the passing offense. The Wildcats want to pound the ball, as they have six players with over 100 yards rushing on the season. OSU ranks 6th vs the run and could stifle the Wildcat offense early and often.

Odds for Northwestern vs Ohio State

FanDuel currently lists Ohio State (-17.5) as the favorite with a total set of 53.5. This is not a good matchup for the Wildcats. Everything that Ohio State does well is a weakness for Northwestern, and the line shows that. OSU is a high powered, fast tempo team that can attack either on the ground or through the air.

The Buckeyes have rushed for over 200 yards every single game this season, and Justin Fields is a star in the making. I don’t think this game is ever close, give me OSU -17.5. I think you could also take the over here with confidence because this will be a blowout. Assuming OSU puts up 40 (which is below their season average) you don’t need much from NW.