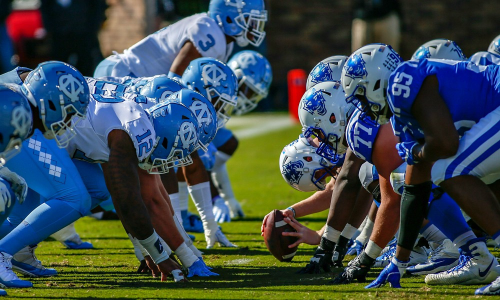 The Victory Bell is up for grabs Saturday when North Carolina travels to Duke for a noon ET kickoff, and there is plenty on the line for both sides in this ACC rivalry. The Tar Heels (4-2) sit in a three-way tie for fourth in the ACC standings but need to bounce back after a disappointing 44-41 loss at Virginia last weekend. The Blue Devils (2-5) stepped out of league play to trounce Charlotte 53-19 last week, but at 1-5 in the conference need a strong finishing push beginning Saturday.

UNC fell short last week despite a huge offensive night from a couple of its stars. Quarterback Sam Howell passed for 433 yards, third-most in school history, and four touchdowns, while receiver Dyami Brown finished with 11 receptions for 240 yards, the second-highest receiving total by a UNC player. But the Tar Heels defense gave up 28 unanswered points at one stretch and could not stop a fake punt late in the fourth quarter.

Since opening the season with four consecutive losses – all in ACC action – the Blue Devils have won two of their past three games. Saturday opens a finishing four-game stretch against conference foes and Duke could use the type of start it enjoyed last week when the Blue Devils raced to a 17-0 lead. Running backs Deon Jackson and Mataeo Durant combined for 205 rushing yards and four touchdowns in the rout of Charlotte.

Offense has not been a problem for the Tar Heels, as UNC leads the ACC and ranks fifth nationally in total offense at 532 yards per game. UNC ranks second in the league to Clemson in scoring at 38.3 points per game, averaging 309 yards passing (second in the ACC) and 223 yards rushing (third).

The UNC defense is fourth in the ACC in total defense at 382 yards per game, surrendering 418 yards against the Cavaliers. The Tar Heels are giving up 28.2 points per game (seventh in the league), 142.2 yards rushing (fifth), and 239.8 yards passing (eighth).

The Duke defense has ranked in the middle of the ACC pack this season, ranking eighth in average points allowed (29), and seventh in rushing yards per game (155.1), passing yards per contest (237.9), and total yards (393).

Howell leads the ACC and ranks 11th nationally in passing yards per game at 307.7 yards, finishing 23-for-28 last week. Brown is tops in the league in receiving yards (641), yards per game (106.8), and touchdowns (six). The pair of Michael Carter and Javonte Williams are the only teammates in the country to average more than 100 yards rushing per game, Carter ranking third in the ACC at 108 yards per game and Williams fourth at 102.7.

Standout linebacker Chazz Surratt recorded a season-high 10 tackles against Virginia and has four sacks in six games. Surratt’s interception at the goal line with 14 seconds left in last season’s matchup helped UNC hold on 20-17 to snap a three-game losing streak to the Blue Devils.

Jackson (seventh at 547 yards) and Durant (10th at 460 yards) rank in the top 10 in the ACC in rushing, and Saturday’s effort marked the second time this season the duo has surpassed 100 yards rushing in the same game. Clemson transfer quarterback Chase Brice has completed 55.1 percent of his pass attempts for 1,567 yards and seven touchdowns through seven games, throwing just 14 passes in last week’s blowout victory.

The Blue Devils will unleash two of the better pass rushers in the country in defensive ends Victor Dimukeje and Chris Rumph II. Both have recorded 7.5 sacks on the season and are tied for the ACC’s top spot. Duke will need both to disrupt Howell’s timing and keep the Tar Heels from getting their passing game going to pull the upset.

Bet Duke and the Points, and Take the Under as UNC Wins

UNC certainly will be motivated after letting Howard’s big day last week go for naught, but the Tar Heels will need to keep Dimukeje and Rumph in check. Strange things sometimes happen in rivalry games – especially one between two foes separated by just nine miles. The Tar Heels get the win but won’t cover the spread, so take the under as Duke slows things down just enough.