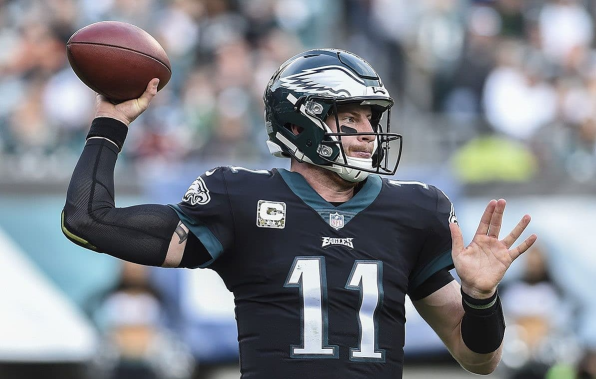 Sunday afternoon features a matchup of NFCNorth versus NFC East when the Chicago Bears (3-4) travel to Lincoln Financial Stadium to take on the Philadelphia Eagles (4-4).  This is truly a matchup of teams who had high expectations coming into the season but have failed to live up to them.  Both teams will look to pull one step closer to relevancy on Sunday as they square off with kickoff scheduled for 1:00 pm ET.

For the Chicago Bears, the frustration has been all about the offense.  Third year quarterback Mitch Trubisky has been anything but spectacular, which is especially frustrating for Bears fans as he was drafted ahead of the likes of Patrick Mahomes and Deshaun Watson.  It hasn’t just been Trubisky, though.  The offensive line has struggled, the running game has struggled and, as exemplified by their one point loss to the Chargers last week, their kicking game is still struggling.  With a defense who may not be as good as last year but is still pretty decent, it is the offense that needs to pick it up.

For the Eagles, last week had to feel good.  After having an inconsistent season through the first 7 weeks, the Eagles were able to travel into Buffalo last week and beat a tough Bills’ defense on the road 31-13. They will look to build off of that win and double down against a tough Bears’ defense.  If so, they might just be able to salvage this season yet.

The Philadelphia Eagles come into this as 4-point favorites playing at home.  The over/under for points scored is set at 41.5.

On the offensive side, it is the PhiladelphiaEagles who come out ahead.  They currently rank 14th in the NFL in points per game averaging 25.2 (29 at home).  For the Bears, they fall to 27th overall averaging an average of 18.3 points per game (22.7 on the road).

On the defensive side, it is the Chicago Bears who hold the advantage. They currently rank 6th in the NFL allowing an average of 17.4 points per game (17.7 on the road). For the Eagles, they come in 21st allowing 24.9 points per game (20.0 points at home).

Chicago Looking For Offense To Pick Up Game

After winning their division last year, the Chicago Bears came into this season with such high hopes.  Knowing the defense would be solid, there was a lot of hope that MitchTrubisky would take another step forward in his third year in the league.  Unfortunately, to this point, the offense has been anything but effective.  For Trubisky, he is 126 for 195 for 1,092 yards.  He has just 5 touchdowns on the season versus 3 interceptions and has been sacked 14 times.

The leading receiver for the Bears has been Allen Robinson.  Thus far, Robinson has 46 catches for 526 yards and 3 touchdowns.  Beyond Robinson, the next highest receiver is Tarik Cohen who has 32 catches for 184 yards and a touchdown.

On the ground, DavidMontgomery leads the way.  The rookie running back has 98 carries for 366 yards and 3 touchdowns. Tarik Cohen, who was so useful during the season last year, only has 24 carries for 56 yards this season.  For MattNagy being considered an offensive guru, the offense has been quite disappointing thus far.

Eagles Hope To Use Last Week As A Rallying Point

After a slow start to the season, a big win over a tough Buffalo defense has to feel inspiring.  They will be tested again this week as the Bears defense is equally as stout. Leading the way for the Eagles is Carson Wentz.  On the season, Wentz is 164 for 264 for 1,821 yards, 14 touchdowns and 4 interceptions. On the season, he has been sacked 16 times.

The leading receiver for Wentz has been tight end Zach Ertz.  On the season, Ertz has 37 catches for 424 yards and a touchdown.  Former Chicago Bear Alshon Jeffery comes in next with 30 catches for 317 yards and 3 touchdowns.

This doesn’t feel like a game that I would have a lot of confidence either way on.  The Eagles offense has been decent but are going against a good defense in the Bears.  On the flip side, the Bears’ offense has been horrific but the Eagles defense hasn’t exactly been stellar.  Long story short, I have a little more trust in the Eagles to find holes in the Bears defense at this point than I do Mitch Trubisky to take advantage of a weak Eagles’ secondary.  Maybe this is the game that Trubisky breaks out a little this season, but I think the smarter money is on the Eagles to control the ball and wear down the Bears’ defense.  For my money, I am taking the Eagles at -4.