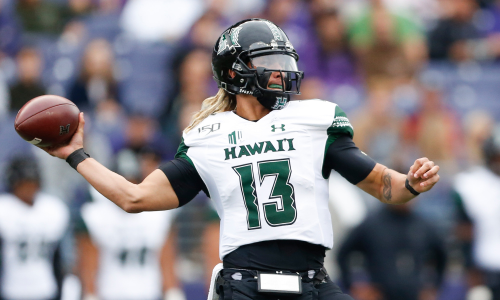 After a 7-6 campaign last season, the 2020 season could not be going any better for the Nevada Wolf Pack. Jay Norvell’s squad is off to a 5-0 start and is one of three Mountain West teams with a perfect conference record. The last time the Wolf Pack started a season was in 2010, when Colin Kaepernick led them to a 13-1 record and a share of the Western Athletic Conference title.

To move to 6-0 and continue their charge for their first Mountain West title, Nevada will have to navigate a tricky trip to Hawaii. The first year of the Todd Graham has had its ups and downs, as the Rainbow Warriors come into this match at 2-3 overall after dropping back-to-back games.

Still, this is a trip that has tripped up a lot of teams in the past. So even though the undefeated Wolf Pack have an edge going in, they will have to produce a strong performance to be able to return to Reno with a win.

How will Nevada handle a rare road game? It’s not the reason that they are undefeated right now, but Nevada has certainly benefitted from a very favorable schedule thus far. Their only true road game was at UNLV, who is 0-4. There was also a “road” game in Las Vegas against 0-5 New Mexico, who was playing away from home due to COVID restrictions in New Mexico.

Will that be a factor in this matchup? You can only win the games that you are given, so they can’t be faulted for how the schedule has played out in their favor. But only 3-2 San Diego State, their opponent last week, has a winning record, and Nevada trailed at halftime before turning things around in a 26-21 win. The Wolf Pack’s other four opponents have a combined record of 2-15.

Hawaii must figure out how to stop the run. Sophomore quarterback Carson Strong has been stellar in leading the Nevada offense so far, completing over 70% of his passes and throwing for 1,805 yards and 14 touchdowns (and only two interceptions). In five games, he has already thrown three more touchdown passes than he did in 10 games last season.

But it’s the rushing attack that could be most pivotal against Hawaii. The Rainbow Warriors have been poor against the run, allowing an average of 226.6 rushing yards per game. They did well to hold Boise State to only 127 yards on 36 attempts last week, but the three previous opponents racked up 281, 279, and 326 yards on the ground. And Boise State’s Andrew Van Buren still crossed the 100-yard mark, the third person to do so against Hawaii already this season.

Nevada running back Toa Taua has only 52 carries in five games and hasn’t had more than 15 carries in any game. But he is averaging 5.9 yards in those carries, and in Nevada’s last trip to Hawaii, he went for 126 yards and a score on 18 carries in a 40-22 win. This week would be a good time to get him some extra touches.

Can Cordeiro keep his cool? It’s been a mixed bag for Hawaii QB Chevan Cordeiro so far.

Cordeiro has put up numbers in the air and on the ground, passing for 1,211 yards, eight scores, and four picks and rushing for 267 yards and three touchdowns. Against Boise State, he threw for three touchdowns and ran for 90 yards, but he completed only 25 of 48 passes. On the year, he has completed only 57.9% of his passes.

That does not necessarily bode well for him against Nevada. Opposing quarterbacks have completed only 56.4% of their passes against the Wolf Pack, who are allowing only 190.2 yards er game through the air and 312.8 yards per game overall.

1st half over 30.5: Nevada’s potent offense will put up points early. Hawaii has given up 67 first-half points in their last three games (20 to New Mexico, 28 to San Diego State, 19 to Boise State).

If Hawaii can shake their habit of starting slowly, they could challenge Nevada’s hopes of going to 6-0. Cordeiro’s ability to make plays with his arm and his legs make him a real threat if he can be accurate and avoid mistakes.

But the Wolf Pack are the better team, and their defense, which has allowed only 14 second-half points in the last four games, will only get better as the game progresses. Back the Pack to cover the spread and stay perfect.

Tonight, two pitchers whose records could use a little polishing match up as the St. Louis Cardinals welcome the Miami Marlins to Busch Stadium to open a three-game series. Cardinals hurler Adam Wainwright has not picked up a win since May 20, while Pablo Lopez’s win in his most recent start last week was his END_OF_DOCUMENT_TOKEN_TO_BE_REPLACED