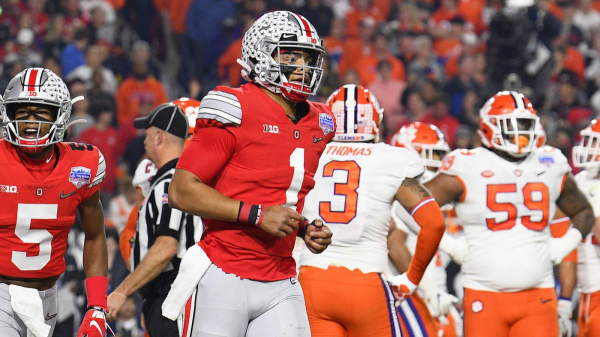 The Nebraska Cornhuskers will be taking on the Ohio State Buckeyes on Saturday, the 24th of October, at 4:00 at the Horseshoe in Columbus. This will be the ninth overall meeting of the Buckeyes and Cornhuskers and their seventh meeting since Nebraska entered the Big Ten in 2011. Ohio State has been victorious in seven out of the last eight matchups.

For the first time since 1939, the Buckeyes will be beginning their season in October. They conquered Missouri that year on October 7th, by 19-0, in what was their first game of the season.

This will also be the first game of the season for the Cornhuskers. The team finished with a 5-7 record last year and will be vying for a better run this year. The Cornhuskers will also be looking towards a better performance from their starting quarterback Adrian Martinez. Martinez only threw for 1,956 yards and made 10 touchdowns, with 9 interceptions last season. He was much better on the ground though, with 7 touchdowns and 626 yards.

Betting on the Nebraska Cornhuskers

Scott Frost of the Cornhuskers has been indecisive about choosing Adrian Martinez as the starting quarterback of the team, but that decision will come very soon. Luke McCaffrey seems to be in a mix to get some time under center for Nebraska.

Cade Warner can be trusted to reel in some passes as the 6 feet 4 inches, 225-pound transfer is a top JUCO transfer expected to provide a spark. The team’s defense may struggle against Ohio State though, as Frost has decried their lack of consistency.

The Cornhuskers had a little bit of running room against Ohio State in the last season, but only scored only seven points. We’ll see if they can muster up some more offense this time around, though hopes are not high.

Scott Frost has made mention of a lack of consistency in his linebacking core, due to some injuries and some simply being unavailable. Javin Wright and Will Nixon will not be playing in this game, due to knee injuries. Braxton Clark and Ezra Miller will also be absent from the game. Omar Manning, Alante Brown and Wan’Dale Robinson’s availability for this game is still in question, and this does not look good for the team in this tough matchup.

Betting on the Ohio State Buckeyes

Justin Fields raked in 41 TDs, and ran for 484 yards with 10 extra scores last season. He is, by consensus, a top-3 pick in the NFL Draft of 2021. Shaun Wade and Wyatt Davis are both back and are giving Ryan Day and Fields more top prospects prospects that they can depend on.

With these additions, the Buckeyes already rich team just keeps getting richer. Fields should play pitch and catch together with his great receiving core, especially against a decimated Huskers’ D. With the Buckeyes arsenal, it is no wonder they are the second favorites to win the National Championship.

Martinez struggled to complete lower than 60% of his passes for 1,956 yards, 10 touchdowns, and 9 interceptions. With many Buckeyes’ starting defensive players have been drafted to the NFL, the team’s defense can’t be as good as last season, though they will still likely cause the Huskers problems.

The Ohio State D-line and linebacking core will be strong, even without Chase Young, but the secondary needs to prove itself. The Buckeyes offense should have no problems scoring, while the Cornhuskers with likely have many struggles.

The Buckeyes are also missing some players, like their opponents. Kourt Williams is out with a knee injury, and the presence of Haskell Garrett, Marcus Crowley, and Master Teague III are also uncertain.

The match on Sunday will be an interesting one, with the Buckeyes seeking to make a statement with this first game, and the Cornhuskers looking to make a comeback and hopefully put up a respectable showing. 27.5 is obviously a ton of points to wager on, so you might want to tease down that speed to under 21 (preserving a three TD win). If you like Nebraska at all, maybe an under bet would also be advantageous.