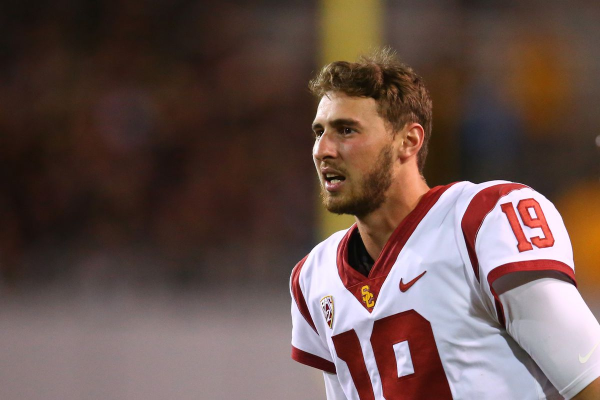 If you understand what conferences are connected to what bowls, enjoy it for one more year before the great bowl shakeup of 2020. It won’t be a complete overhaul, but outside of the Big 12, all of the major conferences will have some reshuffling with regard to their bowl tie-ins. Part of the issue is three new bowls taking place in Boston, Los Angeles, and Las Vegas that will force conferences to move some things around, so be prepared to see some changes in place for the 2020 season.

Michigan formally suspended running back Chris Evans for the 2019 season this past week. He was suspended in February for academic reasons and failed in his attempt to get that suspension reduced from one year to six months. Evans is no longer enrolled at Michigan. As the team’s second-leading rusher last season, he figured to be starting for the Wolverines in 2019 with Karan Higdon now in the NFL, but that won’t be the case.

West Virginia is looking a little thin at safety these days with three players at that position entering the transfer portal in recent days. Starters Kenny Robinson and Derrek Pitts have been joined by backup Eugene Brown, who was on the two-deep coming out of spring practice. None of the three have officially transferred, but it’s not a good sign that three players at one position are exploring their options elsewhere, even with new coach Neal Brown taking over the Mountaineers.

New Quarterback on the Block

It’s not all bad news for West Virginia, who has confirmed that they will welcome former Bowling Green quarterback Jarret Doege as a transfer. Doege led the MAC in passing touchdowns last season with 27. However, he’ll have to sit out the 2019 season before having two years of eligibility with the Mountaineers.

Another quarterback on the move is Colson Yankoff, who will stay in the Pac-12 while transferring from Washington to UCLA. Yankoff left the Huskies after former Georgia transfer Jacob Eason transferred to Washington. He redshirted last season and will have to sit out the 2019 campaign before being eligible for Chip Kelly’s Bruins in 2020.

The Houston Cougars are cleaning up on the transfer market this winter. Defensive backs Kelvin Clemmons and Gervarrisu Owens, both former Minnesota Golden Gophers, are heading to Houston. Meanwhile, the Cougars also added a pair of grad transfers to their offensive line: Justin Murphy of UCLA and Gio Pancotti of Texas Tech.

In an unusual move these days, USC quarterback Matt Fink has decided not to transfer despite entering the transfer portal back in April. There were reports that he was heading to Illinois, but those turned out to be false. In the end, Fink will remain with the Trojans despite being on pace to graduate in July. New offensive coordinator Graham Harrell has opened up the quarterback job after JT Daniels started as a true freshman last season. The Trojans didn’t name a starter after spring practice, giving Fink a chance to compete for the starting job during training camp against Daniels, sophomore Jack Sears, and true freshman Kedon Slovis.

Other Side of the World

Former Florida cornerback Chris Steele has made a cross-country transfer to USC. Steele is a Los Angeles native and actually committed to USC at one point before choosing Florida. He transferred in May amidst issues with his Florida roommate Jalon Jones, who has also left the Gators following multiple accusations of sexual battery. After announcing his transfer, Steele looked to be heading to Oregon but he eventually chose USC to remain close to his family.

The NCAA has approved several waivers to allow transfers to play right away this year, but new Illinois tight end Luke Ford isn’t one of them. Ford, who was one of the top high school players in Illinois a few years back, began his college career at Georgia. Even after hiring a high-profile lawyer to help with his final appeal, Ford was denied despite his wish to be closer to his ailing grandfather. However, the NCAA doesn’t consider grandparents to be part of a nuclear family, which is why Ford’s waiver was denied.