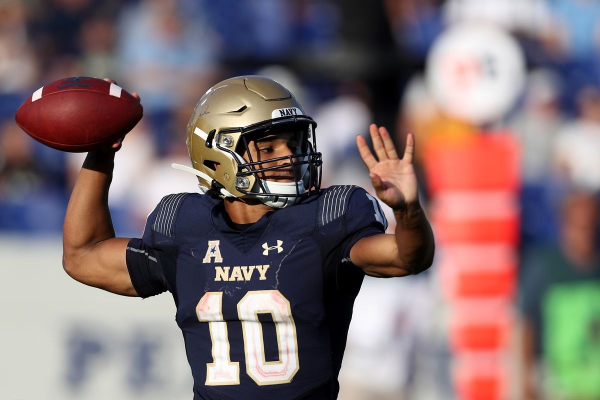 Saturday afternoon will feature a traditional matchup that always tends to produce great games as the No. 21 Navy Midshipmen (7-1) travel to Notre Dame Stadium to take on the No. 16 Notre Dame Fighting Irish (7-2). Kickoff for this one is scheduled for 2:30 pm ET.

The Navy Midshipmen currently find themselves in first place in the American West division of the American Athletic Conference. It has been a fantastic season, as their only loss came back at the end of September with a 35-23 setback to No. 18 Memphis. Since then, they have rattled off five wins in a row, including a 56-10 pounding of Connecticut two weeks ago. Now, with an extra week to prepare thanks to a bye, Navy will be looking to upset the Fighting Irish on the road Saturday.

Notre Dame was finally able to win a game convincingly last week for the first time since early October with a 38-7 win over Duke on the road. Prior to that, they had just squeaked by Virginia Tech 21-20 and, the week before that, had lost 45-14 to No. 14 Michigan. As an Independent team, Notre Dame does not have a conference championship that it is fighting for, but this game could still have big implications for not only its national ranking but the quality of bowl game it gets selected to.

The Notre Dame Fighting Irish come into this as seven-point favorites playing at home. The over/under for points scored is set at just 54 points.

On the defensive side, these two teams are neck and neck. Notre Dame holds the slight advantage, ranking 17th overall in opponents’ scoring, allowing an average of 19.2 points per game (16.2 at home). Navy is 19th, allowing 19.7 points per game (20.7 on the road).

The Navy Midshipmen are the definition of a running team. Despite that, head coach Ken Niumatalolo has allowed the passing game to open up a little bit (key words being, little bit). On the season, quarterback Malcolm Perry has thrown for 722 yards, five touchdowns and three interceptions. What this has done for Navy is keep defenses a bit more honest as they at least have to respect an occasional pass as opposed to being able to completely all-out gamble on the run.

Even though they pass it a little more than before, nothing illustrates the Midshipmen’s preference for the run better than the fact that their leading receiver has just nine receptions (that is not a typo). Mychal Cooper has nine catches for 241 yards and a touchdown.

Notre Dame Tries To Get Rolling

Notre Dame is certainly a talented team, but it has played a bit more inconsistently than in years past. Still, the Irish have some weapons, including their quarterback Ian Book, who has thrown for 2,009 yards with 21 touchdowns and six interceptions. Book has also rushed for 390 yards and another four scores.

The Irish’s leading rusher is Tony Jones Jr., who has rushed for 585 yards this season. In addition to the rushing yards, he has also put up four scores.

Navy And The Points

I have gone back on forth on this one for a bit, not because I don’t think Navy can play Notre Dame tough, but because of the spread. If it was at the Navy +10 like it opened up at, this would be a complete no-doubter for me. At +7, I still lean Navy, but not nearly as strongly.

The one thing that I will give the Midshipmen is that they always seem to play Notre Dame tough, and they may have one of their best teams to pull off the upset. In the last three head-to-head battles between the two, Navy is 1-2 straight up but 3-0 against the spread.

At the end of the day, I wouldn’t blame you if you went either way, but for my money, I am going to roll the dice that Navy can make that 4-0 and cover the spread (if not win outright). Take Navy at +7.