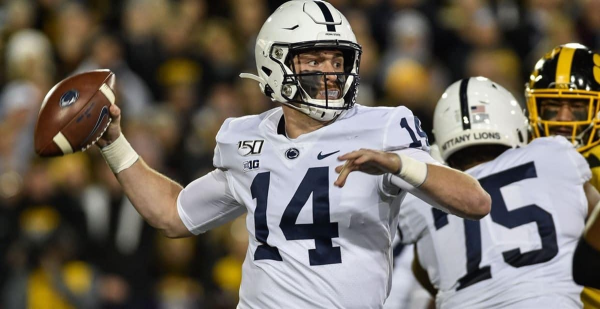 Saturday night will feature a Big Ten battle of Top-25 teams when the No. 16 Michigan Wolverines (5-1) travel to Beaver Stadium to take on the No. 7 Penn State Nittany Lions (6-0). Both of these teams are battling with Ohio State for supremacy within the Big Ten East, and a win on Saturday would help strengthen both teams’ cases in terms of not only their conference but the national rankings as well. Kickoff for this one is scheduled for 7:30 pm ET.

For the Michigan Wolverines, it has been a frustrating up-and-down season thus far. Even though they currently sit 5-1, their play has been much less consistent. This was exemplified last week with their victory over Illinois. Even though they won 42-25, the 2-4 Illini cut the lead down to 28–25 at one point. Still, the Wolverines sit in the Top 25 and will look for a signature win over Penn State Saturday.

Speaking of signature wins, Penn State finally got one of those last week when it beat No. 23 Iowa 17-12. The most impressive part of the defensive display was the fact that Penn State held Iowa to just 70 yards rushing on 30 attempts. They will look to impose that same defense on a team that has been susceptible to turnovers in the Wolverines.

The Penn State Nittany Lions come into this as 7.5-point favorites playing at home. The over/under for points scored is set at 47.

On the offensive side, it is the Nittany Lions who hold the advantage. Currently, Penn State ranks 28th in the nation in points per game, averaging 34.6 (32.3 at home). The Wolverines come in 45th overall, averaging 30.3 points per game (28 on the road).

On the defensive side, Penn State is one of the best in the nation. They currently rank second overall in points allowed per game, allowing just 8.4 points (10 at home). Michigan comes in 14th in the nation, allowing 17.5 points per game (30 on the road).

Michigan would love to get its offense rolling on Saturday, but to do so, it will have to overcome one of the best defenses in the nation. Leading the way for Michigan under center will be quarterback Shea Patterson. On the season, Patterson has thrown for 1,246 yards, nine touchdowns and three interceptions. He also has rushed 36 times for 55 yards and four touchdowns. His leading receiver to date has been Ronnie Bell, who has 20 catches for 361 yards.

As one of the last remaining teams in the Top 25 to be unbeaten, the Penn State Nittany Lions certainly don’t want to let that streak end this week. Quarterback Sean Clifford is going to try to keep it that way. On the season, Clifford has thrown for 1,560 yards, 13 touchdowns and two interceptions. He has also rushed for 252 yards and two touchdowns.

On the ground, the team is led by freshman running back Noah Cain. This season, Cain has rushed 57 times for 310 yards and six touchdowns. He also has five catches out of the backfield for 47 yards.

While Penn State’s record certainly is not full of wins over high-caliber teams, they also haven’t had the ups and downs of Michigan. Throw in the fact that Michigan is 2-8 against the spread in the last 10 games, Penn State is 6-1 against the spread in its last seven home games against teams with winning records and that Michigan is allowing almost 20 more points to opponents on the road than at home, and it could spell disaster for the Wolverines. The 7.5-point spread is intriguing for two teams that have solid defenses, but for my money, I am taking Penn State despite laying the 7.5 points.