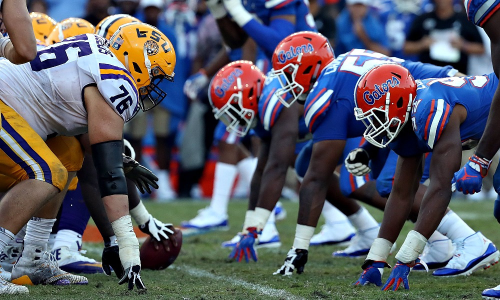 The LSU Tigers are the defending national champions and will be looking to recover from their previous winless run of five games in eight matches. They have not been impressive so far and have let in more than 30 points in each of their games. The Florida Gators are having a great season, and they will be looking to cement their spot in the SEC Championship game.

The Tigers lost their last game at home when playing against top-ranked Alabama. The game ended in a disappointing 55-17 scoreline with the home team allowing their opponents some 650 yards of offense in the whole game. The team was already down by 21 points early into the second quarter which shows how poor their defense has been this season with their 97th ranking nationally. Jontre Kirklin and John Emery Jr managed a touchdown for the losing tigers with the latter also rushing for 79 yards. The team’s offense is ranked in position 61 nationally.

The Gators are having a good season having recorded eight wins in their first nine games. This has helped secure a spot in the SEC Championship game where they will play Alabama. In their last match on the road, against Tennessee, the Gators had a 10 point lead at halftime. They went on to win the game with a score of 31-19. The team is currently ranked 6th nationally and managed to rush for 19 yards with 17 carries in the game.

Kyle Trask, who is a candidate for the Heisman Trophy, managed to record 433 passing yards in this game with four touchdowns to his name too. Kyle Pitts also made some contribution with his rushing for 128 yards and seven catches.

Both teams have several names on their injury list with some being questionable for Saturday’s game. The LSU Tigers have got Myles Brennan and Travez Moore unavailable for this game. Racey McMath and Jaray Jenkins are all questionable for the game against Florida. On the part of Florida Gators, there are only three players who are doubtful for this coming game. Jeremiah Moon is out with a foot injury while Trent Whittemore is out with a rib injury. Jaelin Humphries is another player who is out with an undisclosed injury.

The LSU Tiger has an ATS of 8-4 in their past 12 games while the ATS of their last five games played in December is 4-1. On the other hand, the Florida Gators have an ATS of 5-2