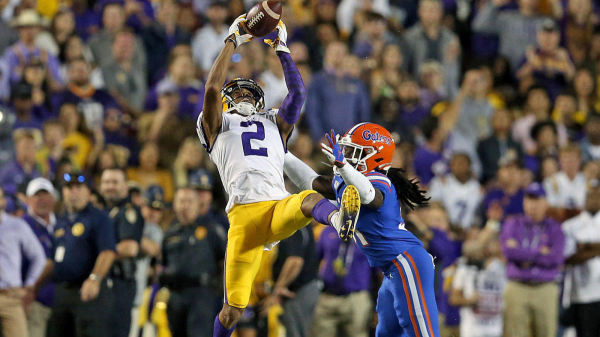 In the closest thing to a national title game during the regular season, the No. 2 LSU Tigers (8-0) will travel to Bryant-Denny Stadium to take on the No. 3 Alabama Crimson Tide on Saturday. Both of these teams are looking for the win as it has huge implications for both the College Football Playoff and the SEC West conference standings. Whichever team wins this one will be in driver’s seat to be in the final four for the national championship playoffs.

The winner of this contest will be atop the SEC West standings and hold a tiebreaker over the other team going forward. Kickoff for this huge matchup is scheduled for 3:30 pm ET.

LSU has put together quite the resume thus far, beating Florida and Auburn and climbing to the No. 1 ranking in the AP poll. The initial College Football Playoff rankings have them at No. 2 behind Ohio State, but if they can beat No. 3 Alabama, they might just jump back into that top overall spot.

Alabama comes into this one having won big in its last two matchups, routing Arkansas and Tennessee. With a weaker than normal schedule, it is paramount for the Crimson Tide to win this one, particularly playing at home.

The Crimson Tide come into this as six-point favorites playing at home. The over/under for points scored is set at 62.5.

Alabama has certainly gotten the best of LSU lately, but this is a much better squad than the Tigers have had in recent years. It all starts with the quarterback play, as Joe Burrow has been sensational. As a definitive Heisman candidate, Burrow has thrown for 2,805 yards, 30 touchdowns and just four interceptions.

On the ground, LSU is led by Clyde Edwards-Helaire, who has rushed for 683 yards and eight touchdowns this season.

Despite playing an easier schedule than usual, Alabama has still been rolling and is undoubtedly one of the best in the nation. Nick Saban and company are trying to prove that with Tua Tagovailoa, they aren’t just one of the best, they are the best. Despite missing time with an ankle injury, Tagovailoa has still thrown for 2,166 yards, 27 touchdowns and just two interceptions.

Alabama’s leading receiver has been Jerry Jeudy, who has 52 catches for 682 yards and eight touchdowns. Devonta Smith has also had a nice season going for 43 catches, 721 yards and nine touchdowns.

On the ground, Alabama is led by Najee Harris, who has 642 yards rushing and five scores on the season.

Tua Will Dictate How To Bet

While Tagovailoa is expected to play in this one coming back from ankle surgery, there are still a few lingering doubts. First, if he can’t go for some reason (which I thoroughly anticipate he will), then the momentum definitely swings to LSU. Possibly more important, though, is how he looks if he is able to play. He will have had several weeks off, and to face LSU in your first game back is a pretty daunting task.

Throw in the hype of the big game (so big President Trump is expected to be in attendance), and it will be interesting how Tagovailoa comes back after a long absence. If he is healthy and rolling, Alabama is likely the smart bet.

With that being said, and uncertainties that won’t be known until the game is played, my money is to take leading Heisman candidate Burrow and the six points in this one.