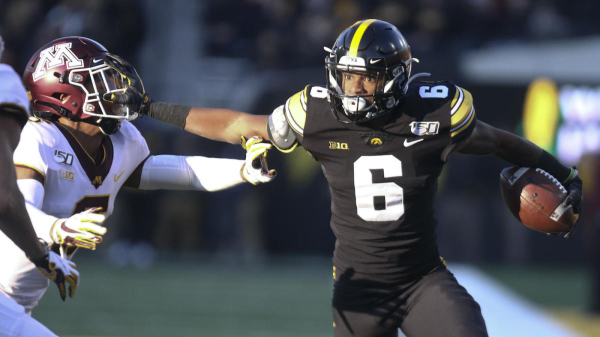 The Minnesota Golden Gophers will be going hard against the Iowa Hawkeyes at the TCF Bank Stadium, Minnesota, USA, for a Big Ten football action on November 13. The game will be aired live on the FS1 Channel and will commence at 7:00 PM EST.

Will The Iowa Defense Curb Ibrahim?

The Golden Gophers running back Mohammed Ibrahim has been a thorn on the flesh of opposing defenses this season. Against Michigan, Ibrahim rushed for 140 yards with two touchdowns, putting up consecutive 200-yard performances, with the most recent against Illinois, with 224 yards and four touchdowns, earning himself the Offensive Player of the Week title at the Big Ten.

The head coach, P.J Fleck, had nothing but praise for the junior running back. He has tagged him as one of the most special backs in America. He told AP that while Ibrahim is not the biggest, not the strongest, neither is he the fastest, but he has incredible vision.

The Iowa defense is the best in the Big Ten at stopping run with 102 yards per game. The Iowa Hawkeyes is one team that loves to dominate games and pound the ball on the ground, under the direction of the head coach, Kirk Ferentz. Quarterback Spencer Petras racked up a total of 89 pass attempts during their first two games in the season. While they lost both games, the Iowa Hawkeyes were in a position to win both times.

The Friday fixture against Minnesota will see the Iowa Hawkeyes set the tone with the run game before exploiting the Minnesota secondary through the air.

The CFB has the Iowa Hawkeyes ranked in the 22nd position in defense ranking, having allowed an average of 26.21 points for a total of 2,521 yards, 1,762 in passing yards, and 759 rushing yards.

The Golden Gophers to Fight Hard to Maintain Momentum

The Golden Gophers lost their season opener opponent, Michigan, which saw them off to a poor start. With great intention to make a comeback in their next fixture against Maryland, it came as a shock to many to see them lose. Luckily, they snatched a win against a depleted Illinois team in what was a much-needed win.

The Golden Gophers are coming into this game with momentum, and they intend to keep it going. With its defense in the lag, allowing 2.89 points per drive, ranking 12th in the conference. The Gophers offense, which is centered around Mohamed Ibrahim, is ranked third in the Big Ten in points per drive.

Mohamed Ibrahim has a total of 571 yards on 97 carries and 10 rushing touchdowns, with a 190.3 rushing yards per game are the most in FBS, and over 200 total yards clear of Maryland’s Jake Funk in the Big Ten.

Quarterback Tanner Morgan appears to have regressed off an amazing sophomore year, which had him with a 66.1% completion rate, 28-6 touchdown-interception ratio, 10.2 yards per attempt. He was only able to accumulate a total of 73 passes in 2020. He will be expected to force the ball down the field more often than not in a bid to make the plays that can decide the game. If he does, one of the most talented wide receivers in the country, Rashod Bateman, will be there as a target. With Ibrahim and Rashod playing at their top performance level, the Gophers should be victorious in this game.

The Minnesota Golden Gophers has been inconsistent on both sides of the ball this season. With a very porous defense, both on the ground and through the air. It would not come as a surprise to see the Iowa Hawkeyes win.