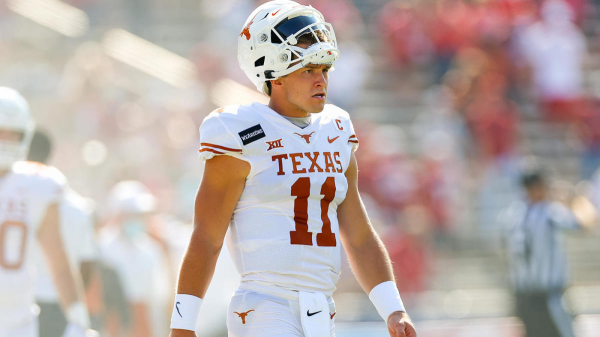 This Friday, the Iowa State Cyclones (6-2) go head to head with the Texas Longhorns (5-2) in a Big 12 college football matchup at the Darrell K Royal-Texas Memorial Stadium/Jamail Field, Austin, Texas, USA. This matchup will kick off at 12:00 PM EST on November 27.

Iowa State quarterback Brick Purdy passed for 236 yards scoring 3 touchdowns and running back Breese Hall ran for 135 yards with 15 carries, scoring 2 touchdowns on the ground for the Cyclones. Meanwhile, Xavier Hutchinson was the leader in receiving yardage, hauling in 6 catches in 111 yards with 1 touchdown.

Season lead quarterback Brock Purdy has passed for a total of 1,713 yards with 13 touchdowns and 6 interceptions. Meanwhile, running back Breece Hall is the lead rusher so far this season, running for 1,169 yards with 180 carries and scoring 15 touchdowns, and wide receiver Xavier Hutchinson leads the receiving lineup with 41 receptions in 518 yards with 4 touchdowns this season.

The Iowa State Cyclones are faring better in the injuries department with just one player Tarique Milton out with an arm injury.

Fresh from a break, the Longhorns will be looking to improve their overall record

The Texas Longhorns had their game against Kansas canceled due to COVID-19 complications and are currently maintaining a three-game straight win. Therefore, the team’s last game was against the West Virginia Mountaineers, which they won 17-13. During the game, the Texas quarterback Sam Ehlinger passed for 184 yards scoring 2 touchdowns, and RB Bijan Robinson rushed for 113 yards with 12 carries. Wide Receiver Jake Smith headed the receiving lineup securing 3 catches in 59 yards and scoring 1 touchdown.

In total offense this season, the Texas Longhorns rank 15th in the nation averaging 40.4 points per game. The team has accumulated an average of 269.9 yards across the air, with 167.3 yards average on the ground, totaling 437.1 yards on average.

It is going to be a battle between two teams that have been playing quite well this season and could go either way. But we expect the Cyclones to come away with the win.