Indiana vs. Wisconsin Preview: Can the Hoosiers Win Without Penix? 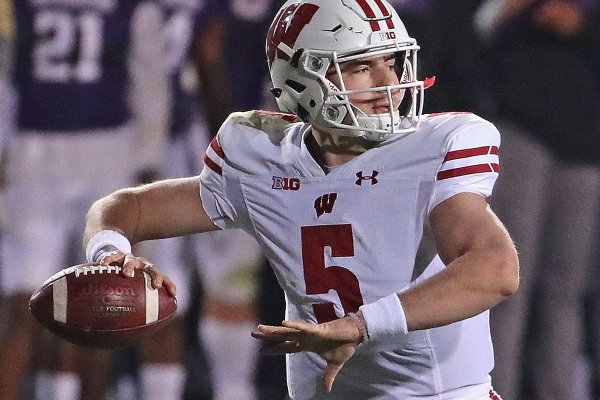 There have been many storyline on and off of the field in the 2020 college football season. On the field, the Indiana Hoosiers have been one of the biggest surprise success stories. At 5-1, the Hoosiers are in position for a prominent bowl game heading into the home stretch of the regular season.

However, their dream season is going to have to continue without their star quarterback Michael Penix Jr. Penix went down with a torn ACL in last week’s 27-11 win over Maryland and is done for the year. With Penix out, Tom Allen turns to sophomore Jack Tuttle to lead the way.

Tuttle will be tasked with a Wisconsin team that’s in a much different position than it was not long ago. The Badgers were in the discussion as a possible playoff contender, but they lost at Northwestern two weeks ago. Then they lost a third game of the season to a COVID-related cancellation, which means they are no longer eligible for the Big Ten championship game.

How will the action play out in Madison, and what could decide the outcome?

The redshirt freshman will need to be much better against Indiana, who leads the nation in interceptions with 16. The Hoosiers have recorded at least two interceptions in each game this season and have picked off three passes in each of their last three games.

Many of those interceptions have set up the Indiana offense with great field position, so it will be imperative for Mertz to avoid mistakes that will put his side’s defense on the back foot.

Can Indiana get it done on the ground? Tuttle has a ton of potential, but this will be the most action of his collegiate career. The Hoosiers will need to have some success running the ball to take some pressure off of the sophomore slinger.

Running the ball has not been a strength for Indiana, as they average only 3.2 yards per carry. That doesn’t exactly bode well against Wisconsin, who is stout against the run. The Badgers gave up 131 rushing yards in their opener against Illinois, but they held Michigan to 47 yards on 19 attempts and Northwestern to 24 yards on 23 attempts.

That said, Indiana is coming into this game off the back of their best ground effort of the season, as they racked up 234 yards on 48 attempts against Maryland. Stevie Scott ran for 80 yards and three touchdowns, and Tim Baldwin, Jr. ran for 106 yards on 16 carries. That success was key in helping put the Terps away in what was a close game well into the third quarter.

Will disappointment be a factor for Wisconsin? After routing Michigan in Ann Arbor last month, the Badgers looked like they could be in the mix for the playoffs. But those hopes are all but dashed now, and a Big Ten championship isn’t a possibility either due to their trio of canceled games. That is not the outcome they would have envisioned or hoped for weeks ago.

Will that be a factor? There is still a lot to play for, so it is not likely to be. Not only is this potentially their last home game of the season, unless they schedule a home game for December 19, but if they can win out, a good bowl game could still be in the cards. It likely won’t be the one they want, but it would be a trip somewhere much warmer than Wisconsin is at the turn of the year.

Indiana +7.5 1st half: Penix was a big reason for Indiana’s success this season, but he wasn’t the only reason. Expect the Hoosiers to come out playing inspired football. They may still end up trailing at halftime, but it will still be a close game going into the second half.

Indiana suffered a big blow last week with Penix going down, and Tuttle will have a tall task in facing one of the nation’s best defenses in his first collegiate start. But the Hoosiers have responded well to challenges thus far this season. They pulled out a dramatic overtime win at Penn State, almost overcame a 21-point deficit at Ohio State, and weathered a tough game against Maryland, in which Penix had struggled prior to his injury.

Wisconsin is certainly a huge challenge, but Indiana can hold their own and give themselves a chance, especially if they can force Mertz into some turnovers. In the end, the Badgers should get the win and put an end to Indiana’s hopes of a New Year’s Six bowl. But this is a much different Indiana team than we are used to seeing, and it is tough to see them getting routed even without their star signal-caller.

Tonight, two pitchers whose records could use a little polishing match up as the St. Louis Cardinals welcome the Miami Marlins to Busch Stadium to open a three-game series. Cardinals hurler Adam Wainwright has not picked up a win since May 20, while Pablo Lopez’s win in his most recent start last week was his END_OF_DOCUMENT_TOKEN_TO_BE_REPLACED