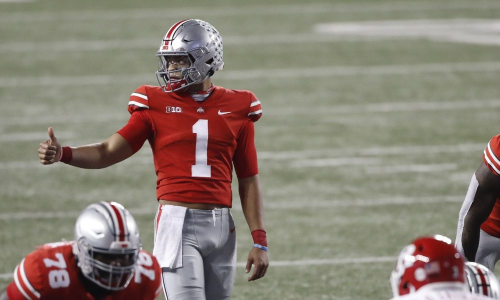 This week, the 12th week of the NCAA Big Ten football competition, the Indiana Hoosiers will be traveling to the ‘Horseshoe’ Ohio Stadium in Columbus, Ohio, to face the Ohio State Buckeyes. The match will kick off by 12:00 PM EST on Saturday, the 21st of November. This epic matchup will be on FOX TV.

The Indiana Hoosiers (4-0) have been steadily climbing the Big Ten standings and will now come face-to-face with the undefeated Ohio State Buckeyes (3-0).

This game is the biggest football matchup for the Indiana Hoosiers in decades. The Hoosiers are ranked 9th in the NCAA standings and have lost 21 straight games to the Ohio State Buckeyes. A victory in this game will get the team on the way to making the Big Ten Championship Game.

The Indiana Hoosiers won their recent match against the Michigan State Spartans in a comfortable 24-0 victory. The Indiana quarterback Michael Penix scored 2 touchdowns, passing for 320 yards with 2 interceptions in the game against the Spartans. RB Stevie Scott III headed the rushing lineup with 23 carries for 84 yards with 1 interception, and wide receiver Ty Fryfogle received 11 throws covering 200 yards scoring 2 touchdowns. The Hoosiers had the game already won by the 3rd quarter, gaining 433 yards of offense against the Spartans. The Indiana defense was on point, only allowing the Michigan State Spartans 191 yards of offense.

This season, Indiana quarterback Michael Penix has been playing exceptionally well, bagging a total of 1070 yards in passing, scoring 9 touchdowns and 3 touchdowns. Lead running back Stevie Scott has 88 carries for 319 yards with 5 touchdowns, and wide receiver Ty Fryfogle has received 24 throws for 424 yards and 4 touchdowns this season.

The Indiana Hoosiers have accumulated an average of 33.8 points per game this season, with 267.5 yards average in passing and 95.3 average in rushing yards totaling 362.8 yards of offense this season.

The Indiana Hoosiers are lucky in the injuries department, having two players unavailable. LB T. Allen is out indefinitely with a lower-body injury. Meanwhile, wide receiver M. Marshall’s availability is in doubt due to a concussion.

Justin Fields and the Buckeyes, unstoppable?

Ranking 3rd in the league tables, the Ohio State Buckeyes are returning from a bye week after 3 consecutive victories. The Ohio State team opened the season with a 57-10 victory in a match against the Nebraskan Cornhuskers, then the Penn State Nittany Lions suffered a 38-25 loss to the team on Halloween, and finally, the Rutgers Scarlet Knights took a 49-27 beating.

The Ohio State offense ranked 4th has been efficient, gaining 46.3 average points per game and an average of 511.3 yards of offense per game, 302.7 average in passing yards, and 208.7 in rushing yards.

The Ohio State Buckeyes have allowed an average of 23.0 points per game and an average total of 356.0 yards, 224.3 average in passing yards, and 131.7 in rushing yards per game.

The Ohio State Buckeyes have a number of their players possibly sitting out Saturday’s game, including K B. Hubbell, who has a groin injury, RB M. Crowley, whose presence is in doubt due to a knee injury, and CB L. Cavazos, who also has a knee injury. Meanwhile, OL G. Cupp and DL J. Cowan’s reasons for possible absence on Saturday are undisclosed.

These two teams are strong and have found their way to the top of the leaderboard. The Indiana Hoosiers are about to have their biggest challenge, and we expect nothing less than the best from them. However, the Ohio State Buckeyes were last beaten by the Hoosiers in 1998. The Buckeyes beat the Hoosiers last season in a final score of 51-10, and although we don’t expect such a wide margin, we expect a victory.