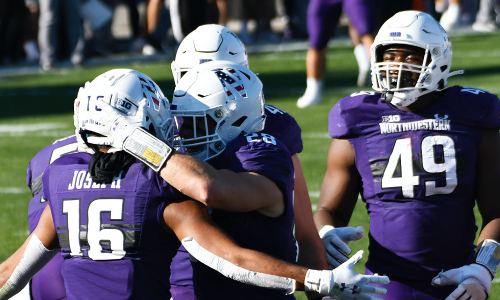 This Saturday, #15 Northwestern (5-1) gets its final tune up before the Big Ten Championship when it hosts 1-4 Illinois for a noon kickoff on ESPN 2.

Northwestern comes in off an unexpected bye due to its game against Minnesota being cancelled due to a COVID-19 outbreak at Minnesota. The last time we saw the Wildcats was in a tough 29-20 loss at Michigan State. The defense held up in that game but the Spartans hit two 40-plus yard field goals in the fourth, then sealed the deal recovering a fumble at the Wildcat goalline for a score to end the game.

The upside from the Minnesota cancellation was it secured Northwestern’s Big Ten West title, its second in three years.

Illinois’ offense had an impressive start last week against #19 Iowa, finishing two drives longer than 70 yards for a 14-0 first-quarter lead. Quarterback Brandon Peters started the day 8-for-8 but quickly fell off in the second half and the Illini offense stalled. Coach Lovie Smith pulled Peters in the fourth for redshirt freshman Isaiah Williams who added a slight spark with his legs. Iowa pulled away to win 35-21.

Northwestern has been a lock at home this season, going 3-0 at Ryan Field with an average 19.3 point winning margin.

Despite the big wins, quarterback Peyton Ramsey and the Wildcats offense has been pretty average. They rank ninth in the conference behind Rutgers in points per game (24.8) and are 11th in passing yards. While Ramsey hasn’t blown the doors off, he’s eliminated enough negative plays to give his defense an edge. He’s getting the ball out quick, favoring short, safe throws. He’s only averaging 5.7 yards per attempt and has been sacked just 9 times.

The Fighting Illini have been run-heavy all season and won’t change now if a quarterback change is made. Chase Brown and Mike Epstein had been a two-headed attack this season but Brown has established himself as the man. The team is second in the Big Ten in rushing and has the third most attempts. Brown leads the team with 440 yards, but Epstein is third in the league in yards per attempt (6.1). If Williams gets the call on Saturday there could be a few more wrinkles in that Illinois backfield.

One unit that shouldn’t keep flying under the radar for Northwestern is its linebacker corps. Paddy Fisher, Blake Gallagher and Chase Bergin have stifled almost everything in the middle of the field and will hear their names called all day against Illinois. There isn’t another team in the conference with three players top ten in tackles this season. Gallagher leads with 59, including 9 for loss, followed by Fisher with 58 and Bergin with 54.

Though Illinois has one of the better ground games, its defense has been one of the worst at stopping the run. They’re allowing 196.2 yards per game and ending up behind the sticks on third down too often. The Illini are only getting off the field on third down at a 45.2 percent clip, also third worst in the Big Ten.

The total in this game is really tempting at a low 40.5 points, but I still have some reservations. Illinois is only 3-3 on over/under and Northwestern has gone under in five of six games this season. Northwestern will host the Land of Lincoln trophy and even with a two-score spread I have the Wildcats covering.