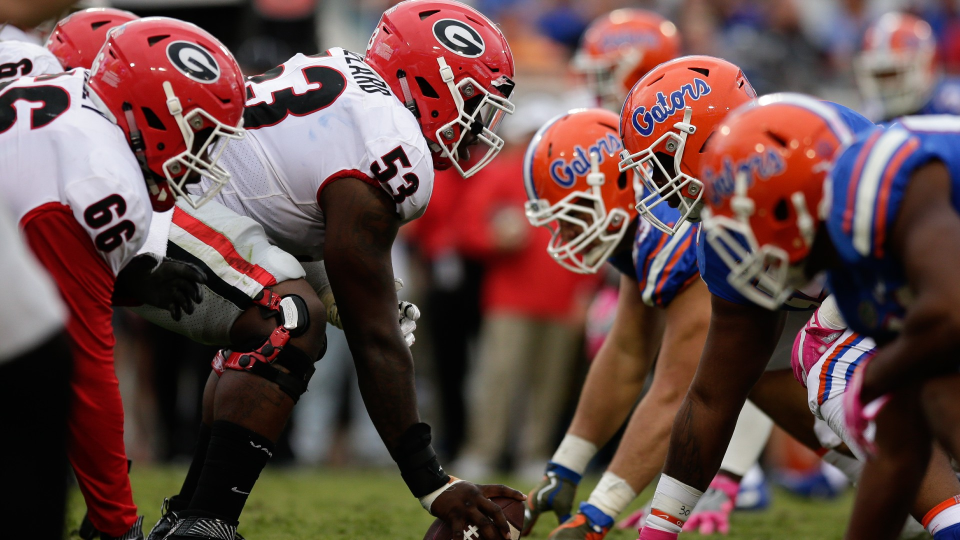 The Georgia Bulldogs and Florida Gators are set to square off in a heavyweight SEC tilt this Saturday (11/7) at 2:30 PM.

This top 25 matchup features the #5 Bulldogs and the #8 Gators. Both of these teams are gearing up for an absolute battle against each other as each game tends to feature at least one ranked team.

Georgia is currently 4-1 after beating Arkansas, #7 Auburn, #14 Tennessee, and Kentucky and losing a game to #2 Alabama. The Bulldogs have shown flashes of greatness this season on the defensive side of the ball as they allow the fewest points (16.2 PPG) and the third fewest passing yards allowed (220.6 YPG).

On the other sideline, you have a Florida Gators team who is making a name for themselves this season. Currently sitting at 3-1, the Gatos have rolled past Ole Miss, South Carolina, and Mizzou while being handed a close loss to #21 Texas A&M.

Florida’s offense is off to a remarkable start. QB Kyle Trask is leading the attack with 18 touchdowns making him tied for 1st in the SEC along with 342.2 YPG which is good for 7th in the nation.

The 3.5 point spread is the lowest either team has faced this season. Georgia is 2-3 ATS this season with both of their wins coming on blowouts against two top 15 teams. Since then, the team has had a streaky defense and a less then average offense.

Florida sits at 2-2 ATS the spread with their offense putting up big number each week on the board, their defense seems to let up similar numbers.

Why Georgia will cover: The Bulldogs will be able to cover based off their run game and their defense. Georgia’s defense is allowing 300.6 yards of total offense per game through 5 games, allowing an average of only 80 yards on the ground.

Although Florida’s offense has put up very impressive numbers, the Bulldogs defense will be riding their performance against Kentucky in which they only allowed 229 yards of total offense. The team is also averaging an SEC third best 175.2 yards on the ground and are going up against a run defense that has coughed up 133.8 YPG.

When it boils down to the numbers, Georgia has won all 4 of their games by over 3.5 points.

These two teams are going to be trading blows all game long. It will be survival of the team that can take the most hits and keep chugging forward. You have a QB in Florida who is averaging Heisman-ish numbers and a Georgia defense who will not budge on the ground.

Although QB Kyle Trusk is playing lights out, a team cannot win a game without having some sort of offense on the ground. Establishing the far below average rush offense the Gators posses might be the downfall of the team. RB Dameon Pierce is going to have to break out into Derrick Henry-like numbers to beat this defense. Pierce is averaging just 42.2 YPG and 1 TD, which is not enough to wear down this Bulldog defense.

What this game is dependent on is if Georgia can establish a decent offense while stopping all the fire power Florida has from Kyle Trusk. If these two things can happen, Georgia has a recipe for success.

This is the second high total Georgia has faced all season and the lowest for Florida. The Bulldogs are 2-3 to the over while Florida is 3-1 respectively.

This is also a toss up. Looking at averages and the history of the two teams this season, the total will be roughly 58.5. However, that number comes against teams that are unlike each other.

The defense from Georgia will need to keep the offense of Florida under wraps and locked down in order to win the game. I firmly believe that they will be able to have the power to keep the Gators in their lowest offensive performance of the season. If the Georgia offense has a game similar to last week in which QB Stetson Bennett went 9/13 with 131 yards and 2 INT’s the under should be extremely attainable.