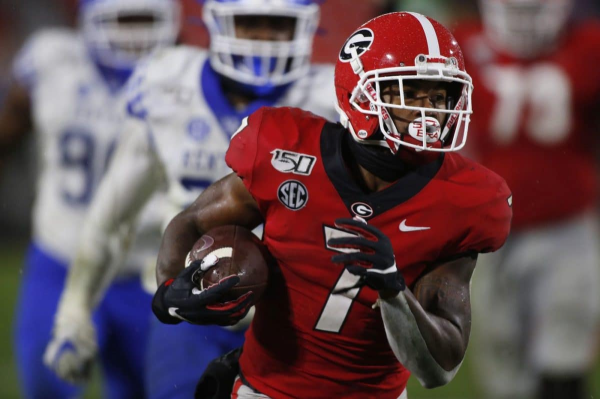 Saturday afternoon features a Southeastern Conference battle of top-10 teams when the No. 8 Georgia Bulldogs (6-1) take on the No. 6 Florida Gators (7-1) in their annual battle in Jacksonville, Fla. With only one loss apiece, this is a crucial game for both, not only for their standing in the SEC East but for the national rankings as well.

While at this point, both are on the outside looking in of a national championship bid, they are both hoping to keep the dream alive with a win Saturday. Kickoff for this one is scheduled for 3:30 pm ET.

The Georgia Bulldogs are going to take their stingy defense into Florida, hoping to come away with the victory. Two weeks ago, they blanked Kentucky 21-0, but the week before that, they lost to unranked South Carolina 20-17. The Bulldogs will try to find some consistency and take care of Florida Saturday.

The No. 6 Florida Gators have to feel insulted coming into this as underdogs despite being the higher-ranked team and playing in their home state. They come into this one having beat South Carolina 38-27 two weeks ago. The week before that, they suffered their only loss this season to the top-ranked LSU Tigers 42-28 on the road. This is certainly a statement game for the Gators who would love to get a win against the eighth-ranked Bulldogs to help their quest for a division title and a spot in the SEC Championship Game.

The Georgia Bulldogs come into this as six-point favorites. The over/under for points scored is set at 45.

On the defensive side, it is Georgia once again that holds the advantage. The Bulldogs currently rank second in the nation in terms of points allowed, giving up just 9.5 points per game (10 points on the road). Florida comes in a very respectable 23rd, allowing 21 points per game. Despite the 21 on average, they have allowed just an average of eight points per game at home this season.

The Georgia Bulldogs are looking to take care of business against a good Florida team and move past them for the lead in the SEC East. To do so, they will look to quarterback Jake Fromm to lead them from under center. On the season, Fromm has thrown for 1,406 yards, nine touchdowns and three interceptions. Amazingly, he has only been sacked four times this season, a testament to how good the Georgia offensive line has been.

Speaking of Swift, he leads the Bulldogs on the ground as well. Thus far, Swift has 752 yards rushing and seven touchdowns to help the Bulldogs’ offense.

Once again, it is not too often that the higher-ranked team playing in its home state is seen as the underdog, but that is exactly how Florida has been tasked thus far. Quarterback Kyle Trask leads the way for the Gators, who hold a half-game lead over the Bulldogs in the SEC East heading into this contest. This season, Trask has thrown for 1,391 yards, 14 touchdowns and four interceptions since taking over for the injured Feleipe Franks.

Trask’s favorite target to this point has been Kyle Pitts, who has 35 catches for 391 yards and four touchdowns. Trask also has Van Jefferson (27 catches, 331 yards, three touchdowns), Lamical Perine (22 catches, 117 yards, two touchdowns) and Freddie Swain (21 catches, 339 yards, four touchdowns) to look for in the passing game as well.

Perine also leads the Gators with 460 rushing yards and four touchdowns. Dameon Pierce has also been productive, having rushed for 248 yards and three touchdowns.

Georgia To Win, But Can It Cover?

On paper, I like Georgia in this one. The Bulldogs have a very stout defense, and their offense has the ability to put points on the board. Really, the only Achilles heel to this point for the Bulldogs has been discipline, as they are one of the more penalized teams in the league. Still, Florida is no walkover and playing for the division lead at stake, they may have a little extra boost to get the job done. When it is all said and done, I do like Georgia more in this one, but from a betting perspective, I think I actually like the Gators getting the six points.