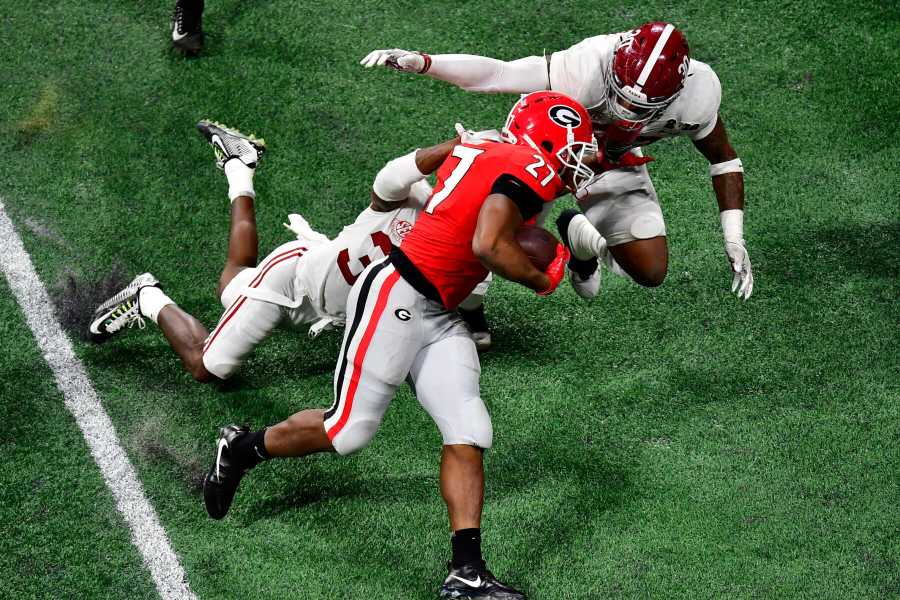 This is the top game of the weekend and might be the top game of the year, unless we get a rematch, or Clemson plays one of these two teams in the National Championship Game. Both teams are 3-0 and looking to extend their winning ways. There is always going to be juice in this rivalry as long as Nick Saban and Kirby Smart are leading these programs. Smart has never bested his mentor, including a high profile loss in the championship a few seasons back.

Georgia has been playing great defense to start the season, as expected, giving up just 12ppg. What is unexpected is Stetson Bennett at quarterback. I believe he was fourth on the depth chart in August, but he is succeeding in his opportunity. The offense has not been that dynamic, but there is a lot of potential there.

Alabama has been awesome on offense this season. The Crimson Tide are leading the nation at 51ppg, and QB Mac Jones has folks asking Tua Who? Unfortunately those same folks are also wondering what happened to the Alabama defense. They were steamrolled last week by Ole Miss and have not been the dominant force we have grown used to seeing under Saban. UGA is not as dynamic as the Rebels but they do have talent. It will be interesting to see which way this one goes. Will it be a defensive battle or will the offenses juice it up?

This one opened at Alabama -7.5, so we have already seen a pretty big move through the key number of 7. It is hard to say what is driving it at this point. It could be how bad the Bama defense looked a week ago, but there could also be public and sharps saying “How can I not bet UGA as an underdog?” That situation does not happen very often.

At that opening number, I was kind of interested in the Dawgs but now that I can get the Tide under a touchdown, less so. I do not see Alabama being able to dominate with their offense against Georgia the way they have against other opponents, but I do think that will be the best unit on the field. They can beat you through the air and on the ground and thus are hard to prepare for. I think they can definitely get Alabama a lead and I am less confident in Georgia’s ability to play catchup.

Georgia is an elite team, capable of beating any team in the nation, so there is some value here. However, if I am going to take a money line against Saban/Alabama I want a better payoff than this one. For Georgia to wi, they need to make this a defensive battle, but I am just not seeing a 20-17 kind of game. If you are on Georgia’s chance the better play is to go with a spread move. You won’t cash in as much, but you get a greater margin of error of course. You can grab Alabama at this price and fold it into a money line parlay to make it worth your while.

Like the spread, this number has also been coming down. It opened at 59 and now has dropped all the way to 56.5. All the moves are implying that Georgia will have more influence on this one that I expect they will. I think they can play well, but per the above it will be the Alabama offense, not the Georgia defense, that will be the more dominant unit. When they are playing frome behind, the Dawgs will have to take some more chances. That should create some big plays for one side or the other, and big plays ultimately lead to scoring.

All three of Alabama’s games have gone over the total this season, and only the opener has been close to the number. Alabama gave up 19 points to Mizzou and 24 to Texas A&M. I think Georgia will at least match the latter. Even if they hold the Crimson Tide to something in the mid 30s, like Mizzou did with 38, we still get that over.