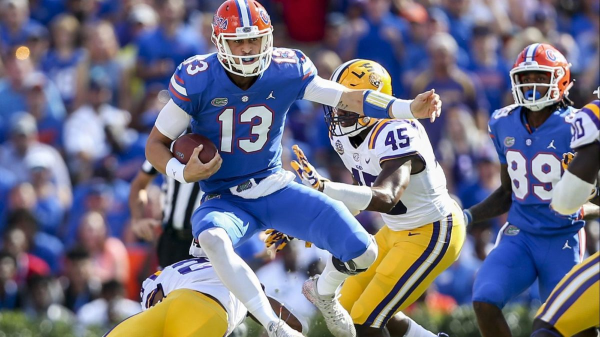 College football is back, and it is kicking off with a bang as the No. 8 Florida Gators travel to Camping World Stadium in Orlando, Fla., to take on the Miami Hurricanes. This SEC versus ACC showdown has intrastate bragging rights written all over it. For the Gators, though, they are hoping for more as they would love to compete for a national championship. For Miami, they are just hoping to improve from a dismal season a year ago. Kickoff for this matchup is scheduled for 7 pm ET.

Gator fans are hoping that last year was the start of something great. After finishing 4-7 in 2017, the Gators, under head coach Dan Mullen, shocked the football universe by going 10-3 overall, including wins over Mississippi State, LSU and a 41-15 blowout of Michigan in last year’s Peach Bowl. After finishing the season ranked No. 7, the Gators are setting their sights on even bigger things for this upcoming season.

Last season, Miami finished 7-6 overall, including a 4-4 mark in the ACC. They were invited to play in the Pinstripe Bowl last season; however, it was a bit of an embarrassment. In the game, they lost to Wisconsin by the score of 35-3. Last season was the final one for head coach Mark Richt, and this year it will be Manny Diaz taking over at the helm. After a so-so recruiting class, the Hurricanes will look to try to get the most out of the players that they do have, something that could be a bit of a challenge this year.

The point spread for this one currently sits with the Florida Gators being seven-point favorites in this neutral-site game. The over/under on total points scored is set at 46.5 points.

On the defensive side, it was Miami that held the advantage. They ranked 18th in the country, allowing just 19.5 points per game, while the Gators came in just a couple spots behind at 20th, allowing 20 points per game.

On offense, Florida seems loaded this year. The Gators return their starting quarterback (Feleipe Franks), leading rusher (Lamical Perine) and leading receiver (Van Jefferson) from a year ago. Franks finished 188 for 322 with 2,457 yards passing, 24 touchdowns, and six interceptions. He also had 110 rushes for 350 yards, and seven touchdowns last season.

With so much skill on the offensive side, and with nine defensive starters returning, this could be quite a fun season for Gator fans.

One of the most interesting quarterback competitions all offseason took place in Miami. On the one hand, you had redshirt freshman Jarren Williams. On the other hand, you had highly-touted transfer Tate Martell coming from Ohio State. Ultimately, though, it is Williams who has won the job in Diaz’s program.

Just a couple days ago, Diaz also indicated that Martell may still be on the field, just in a different capacity. It appears that he may be open to a position change, possibly to wide receiver. How that dynamic works out as the season begins will be interesting to watch.

While the offense may be young and raw, the defense should be pretty elite. They return three starting linebackers, including three-time All-ACC star Shaq Quarterman. Last season, Quarterman had 82 tackles (14 for loss), five sacks, and an interception. With a stout defense, the Hurricanes may be able to afford some difficulties on the offensive side.

This one comes down to experience. With so many returning starters for Florida, they will be hoping to play as if they never left off from last season. I think that experience is going to play a large role in this one, especially when it comes to Williams at quarterback for Miami.

This is not saying Williams won’t develop into a good starter, but it is a tough draw to take on the Gators in the opening week, and I think his inexperience will show. While the Hurricanes’ defense is stout, I am not sure they won’t have their backs pinned against the wall in the field positioning game. With that in mind, I like the Gators to win and even cover the seven-point spread.