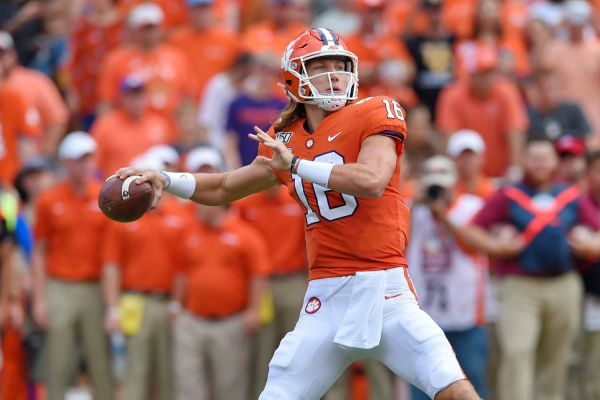 The College Football Playoff is just around the corner, and Saturday night in Glendale, Ariz., two teams with championship pedigree are ready to leave it all out on the field. No. 2 Ohio State (13-0) is ready to take on No. 3 Clemson (13-0), with the winner advancing to next month’s national championship game.

Here is a preview for the Fiesta Bowl, along with odds and a free pick.

Ohio State rolled to a 13-0 record and first place in the Big Ten, with its closest wins coming against Penn State 28-17 and in the conference championship game against Wisconsin 34-21. This season, coach Ryan Day’s squad averaged 48.7 points per game while allowing just 12.5. The Buckeyes also held opponents to less than 250 yards on average while gaining over 530 yards themselves.

The offense is led by Heisman Trophy finalist Justin Fields, who finished the season with 2,953 passing yards and 40 touchdowns with only one interception. Running back J.K. Dobbins was the team’s leading rusher with 1,829 yards and 20 touchdowns on the ground, while receiver Chris Olave reeled in 790 yards and 11 touchdowns on 45 catches.

The Buckeyes also have a pair of potential high NFL Draft picks in Chase Young and Jeffrey Okudah. Young is likely the best pass-rusher in the country, with 16.5 sacks despite missing a couple of games due to suspension. Okudah has been great at cornerback, collecting three interceptions.

Clemson also had a perfect 13-0 record en route to finishing first in the Atlantic Coast Conference. The Tigers snuck out a one-point win against North Carolina but won all their other games comfortably, including a 62-17 drubbing of Virginia in the conference title game.

Coach Dabo Swinney’s team averaged 46.5 points per game and held opponents to a measly 10.6. The Tigers defense limited other teams to just under 250 total yards, while the offense mustered up close to 550 yards a game.

Quarterback Trevor Lawrence helped Clemson win the national championship last year as a freshman, and this year has 3,172 passing yards with 34 touchdown passes. He’s joined by running back Travis Etienne, who leads the team in rushing with 1,500 yards and 17 touchdowns.

Clemson has a pair of receivers in Justyn Ross and Tee Higgins. Higgins has 1,082 yards and 13 touchdowns, while Ross has 742 yards and eight touchdowns.

Ohio State will win if: Dobbins and the offense control the game. Even though Fields gets much of the recognition, Dobbins is a vital part of the Buckeyes’ gameplan. Since he came to the program, Ohio State is 18-0 when he rushes for more than 100 yards, with all three of their losses coming when he’s under that mark.

Going up against one of the best defenses in all of college football, Ohio State will have to utilize Dobbins early and often, controlling the clock and beating down the Tigers defense.

Clemson will win if: The passing attack is strong all game long. While the Tigers have a very balanced offense, they’re a team that thrives on big plays, most of which come through the air. They have a quarterback in Lawrence who torched Alabama in last year’s title game and will look to do so again on Saturday against the Buckeyes.

The game may very well come down to how Ross and Higgins fare against Okudah and the rest of Ohio State’s NFL-caliber secondary. Clemson has to find a way to protect Lawrence and give him time to exploit that secondary throughout the game.

According to FanDuel Sportsbook, the defending champion Tigers are two-point favorites in the desert. Despite two strong offenses, oddsmakers are also expecting a little bit of defense, with the over/under of 63 coming in 13 points under the 76 that was given to Oklahoma-LSU.

This game is as good as it gets. Both teams are chock full of NFL talent on both sides of the ball, and as a result, this game will be a thrilling fight for all four quarters. Ultimately, I’m giving the edge to the Buckeyes.

I believe that they will rely heavily on Dobbins throughout and gash away at a Clemson defense that has had a fairly soft schedule. I also think the Buckeyes’ secondary will allow a couple of big plays to Lawrence, but for the most part, keep him in check.

While Clemson is prepared for the moment after their championship last season, I fully expect Ohio State to be ready right away and show no fear or intimidation. So give me the Buckeyes +2 to advance to the national championship game.