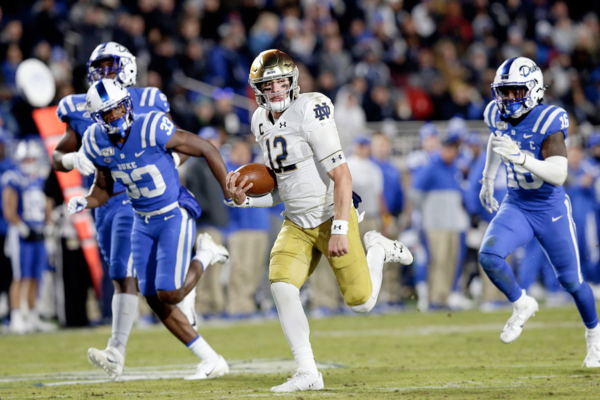 This year has been brutal thus far in many facets, and sports has not been an exception to that. While some schools and conferences have decided to bypass their fall seasons for college football, others are ready to get started.

One of those conferences is the ACC, and both the Duke Blue Devils and Notre Dame Fighting Irish are set to get their seasons underway on Saturday as they clash at Notre Dame Stadium. Kickoff for this one is scheduled for 2:30 pm ET.

While usually an independent, Notre Dame is officially part of the ACC for this season. While they have always had an agreement to play a partial schedule against the ACC, this temporary inclusion will allow them to play a full schedule in 2020. Their inclusion makes them one of the best teams in the ACC on paper, and on Saturday, they will aim to prove it as they take on Duke.

For the Blue Devils, they come into this one after a rough 2019 season. They finished second to last in the ACC Coastal division with a 5-7 record overall (3-5 in the conference). Unfortunately for Blue Devil fans, there is not a whole lot of optimism that they will significantly improve on that record this season.

One unusual aspect of the 2020 season is the limited crowd sizes. For Notre Dame, the expectation is that they will allow about twenty percent of their normal crowd. It will be interesting to see how this affects the Fighting Irish, who have won 18 straight games at home.

According to FanDuel, Notre Dame comes in as the overwhelming favorites with a moneyline of -1600. The Blue Devils sit at +820. In terms of the spread, the Blue Devils sit +20.5 while the over/under for total points sits at 53.5.

Last season, the Notre Dame Fighting Irish held the advantage in scoring. They ranked 10th in the NCAA in points per game at 36.8. The Duke Blue Devils came in 92nd averaging 23.5 points per game.

On the defensive side, it was once again the Fighting Irish who held the edge. They ranked 11th in the country in points allowed per game at 17.9 points. Duke came in 80th overall, allowing an average of 30.6 points per game.

Duke Looks To Upset Notre Dame On The Road

As recently as 2016, the Duke Blue Devils upset Notre Dame. On Saturday, they will look to do it again. Head coach David Cutcliffe will certainly have his work cut out for him, but he is hoping a switch to calling the offense will help his offense be more effective.

In addition to his play-calling, he is also hoping that a new quarterback could help. The Blue Devils welcomed in Chase Brice, a transfer from Clemson, to help at quarterback. Last year, with Clemson, he went 50 for 85 for 581 yards, four touchdowns, and an interception. He also rushed 14 times for 94 yards and another score.

While Brian Kelly saw a lot of turnover in his program from last year, one constant from last year’s 11-2 team will be quarterback Ian Book. Last season, Book went 240 for 399 for 3,034 yards, 34 touchdowns, and six interceptions. He is hoping to pick up from where he left off last season.

Unfortunately for Book, he is going to have to get used to a different supporting cast. Not only are his top three receivers gone, but he also will be looking to freshman Chris Tyree and sophomore Kyren Williams to get it done in the backfield. Still, a solid offensive line, solid defense, and Book under center should be enough for Notre Dame to compete on a weekly basis.

This one comes with the caveat that week one’s can be unpredictable. Still, Duke has a lot more to prove than Notre Dame. Throw on top of that the fact that Notre Dame is playing at home, where they have been unbeatable as of late, and it could spell a long day for the Blue Devils.

For my money, I am taking Notre Dame despite laying the 20.5 points.