Crimson Tide Searches for the 9-0 Win Against LSU Tigers 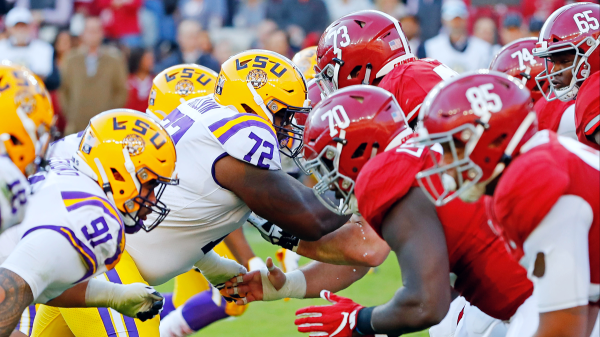 It’s a Saturday night faceoff between two teams from the SEC West Division. The Alabama Crimson Tide (8-0) will be going against the LSU Tigers (3-4) on December 5th at Tigers Stadium.

The Alabama Crimson Tide Looking to Retain their Unbeaten Record

Occupying the number 1 spot on the SEC Wes Division standings is the Alabama Crimson Tide. This team has been crushing their opponents all through the season, their last victim being the Auburn Tigers, who they trashed 42-13 in the latest match of the Iron Bowl last Saturday.

The Alabama Crimson Tide made coach Nick Saban who had to watch from home having been diagnosed with the coronavirus, proud. The Alabama team took an early lead, ending the first quarter 14-0.

Quarterback Mac Jones had a good game passing for 302 yards with five touchdowns and no interceptions, and RB Najee Harris rushed for 96 yards with 11 carries and made one touchdown. Meanwhile, WR DeVonta Smith led in receiving yardage, racking up 171 yards with seven catches.

The Alabama Crimson Tide are ranked 4th in offense in the FBS tables, averaging 48.4 points per game. The team has gained an average of 535.6 total yards this season, 358.1 in passing yards, and 177.5 in rushing yards.

Quarterback Mac Jones is the lead passer so far this season with 2,728 passing yards and 23 touchdowns with three interceptions. The lead rusher remains RB Najee Harris, leading with 148 carries for 893 yards and 17 touchdowns. Devonta Smith leads the receiving lineup with 72 receptions for 1,074 yards and 12 touchdowns.

The Alabama Crimson Tide defense has been exceptional this season, only allowing an average of 18.5 points per game and a total average of 357.6 yards, 238.6 yards through the air, and 119.0 on the ground.

The LSU Tigers are still reeling from their loss to the Texas A&M Aggies. The team won the national title last season but is currently far from repeating that this season. In the game against the Texas A&M Aggies, the LSU Tigers lost the game by a 20-7 scoreline. The team was led on the ground by RB Tyrion Davis-Price, who ran for 18 yards on 11 carries but no touchdowns, and through the air. TJ Finley passed for 118 yards with two interceptions but no touchdowns either. WR Terrace Marshal Jr. held the receiving fort with ten receptions in 184 yards and managed to secure a touchdown for the Tigers.

This season, the LSU Tigers have gained an average of 30.4 points per game, 425.1 yards per game, with 313.4 yards through the air and 111.7 yards on the ground. Quarterback Myles Brennan is the lead passer for the LSU Tigers leading with 11 touchdowns, 1,112 yards and three interceptions, and RB Tyrion Davis-Price is the lead rusher with 88 carries for 367 yards and three touchdowns. With the wide receiver, Terrace Marshal Jr., leading in receiving yardage with 48 receptions for 731 yards and scoring ten touchdowns.

The LSU Tigers do not seem to be looking to repeat last season’s title win. The Alabama Crimson Tide, on the other hand, seems to be vying for the title this season and is quite close to getting it.