Could Ohio State’s Defense be What Costs them the Game Against Michigan State? 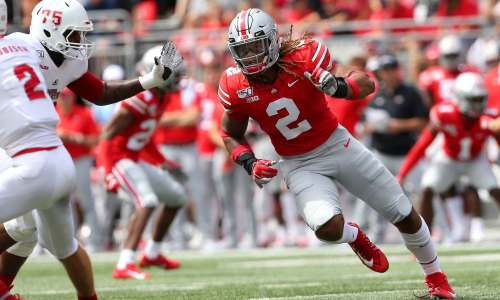 The 4-0 Ohio State Buckeyes are set to take on the 2-3 Michigan State Spartans on Saturday, and believe it or not, there could be cause for an upset alert. While that might sound unfathomable, especially with how dominant Ohio State has been this season, there are cracks in their armor that could shatter if exploited in the right way.

Ohio State has shown to have one of the best offenses in the Big Ten, but the same can’t really be said about their defense. In fact, throughout the first four games of the season, Ohio State has given up 104 points, which is an average of 26 points per game. Keep in mind that 69 of these points were up against unranked opponents, and you can see why the Buckeyes could be in trouble

Now look at the Michigan State Spartans, who might not look like much, but defeated #14th ranked Northwestern. The team currently stands at a record of 2-3, and has a decent Quarterback in Rocky Lombardi. Add in the fact that Ohio State is a little beat up after their win last week against #12 Indiana, and you can see why Michigan State might have a prayer

As for Ohio State, they stand at 4-0 and knocked off #12 Indiana just last week. Although the victory is their biggest of the year, it showed a different side of Ohio State. A side that was getting blown up at times on defense late in the game, and struggling to produce anything meaningful on offense

One example of that is the 28 points that Ohio State gave up in the second half of the game, which gave Indiana a chance to come back. Of course, that didn’t end up happening due to Ohio State’s offense being able to score when it mattered, but it was a huge blow to the defense. It also likely showed off the fact that the Buckeye can’t seem to put together four solid quarters of football.

There are no easy answers to this upcoming Big Ten matchup, and it’s impossible to really pin down what will happen on Saturday. Think about it! Justin Fields threw 3 interceptions last week against the Hoosiers, and might have exposed himself in the process. Seriously though, if the Spartans can study what forced Field’s into that many mistakes, they could duplicate it.

And then there’s rocky Lombardi, who knocked of #14 Northwestern earlier this season, and is looking to do the same with Ohio State. Although ambition is a remarkable thing to have, one must wonder if Lombardi will over excite himself into making mistakes during this game. If that does end up happening, expect Ohio State to capitalize early and often.

Otherwise, if Ohio State’s defense can’t put together 4 solid quarters of football, the win could be Lombardi’s for the taking. It really all comes down to what kind of game this turns out to be, and which team responds best to the changes. One example of this is if Ohio State manages to run up the score in the opening quarters of the game, but the defense eventually becomes gassed as time goes on.

This situation would certainly put Lombardi into a position to capture his second upset of the season, and hand the Ohio State Buckeyes their first loss of the year. What if Ohio State is at 100% during Saturday’s game though? This would be a worst-case scenario for the Spartans and could result in a blowout victory for the Buckeyes.

The odds for the upcoming game between the Ohio State Buckeyes and the Michigan Spartans is what you would expect. Ohio state are the favorites at –2200 while MSU stands at +980. As for the spread, OSU is listed as the –23.5 favorite to win the game, which is interesting given the fact that Ohio States defense is showing notable cracks

The spread for the game is 59.5, raising questions of whether the oddsmakers are preparing for Fields and Lombardi to air it out on Saturday. If that does happen to be the case, it will be interesting to see who comes out of a game like that on top. One might feel obligated to bet on Ohio State in this game, but the Spartans have played spoiler before against a team that should have had them beat. Could the Buckeyes be their next victim?

Remember the 2013 Iron Bowl? Do you remember when the Auburn Tigers toppled the undefeated Alabama Crimson Tide, and handed them their first loss of the season? That’s the kind of energy that seems to be emanating from this upcoming matchup. Sure, go with the safe bet of Ohio State and collect your money if you want, but what about those that want to go for it all?

For that select group of people, put your money on the Spartans. Who knows! Ohio State’s defense could crumble in the second half of the game, leading to Lombardi taking advantage. Or Fields could show the same turnover problems he did last week, and end up costing his team the game that way.