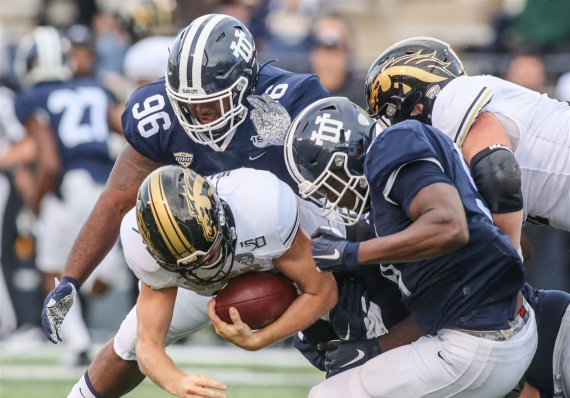 The redshirt sophomore quarterback Kaleb Eleby was exceptional in what was his first game action since 2018, throwing for 262 yards, securing 3 touchdowns, and no interceptions. Led by La’Darius Jefferson who had 9 carries for 70 yards and a score, four different Broncos players scored rushing touchdowns. Dwayne Eskridge rounded up with three catches for 114 yards and two scores to aid the team’s victory.

Western Michigan came into the game with lots of uncertainties as they had lost their MAC Offensive Player of the Year, LeVante Bellamy, who was ranked 10th in rushing yards last season and tied with FBS-lead in rushing touchdowns. The Broncos replaced former starting quarterback Jon Wassink, to bring back one of the best defenses in the conference, with leading tackler Treshaun Hayward, who won the MAC Defensive Player of the Year in 2019.

The Broncos forced two turnovers, including an interception return for a touchdown made by A.J Thomas.

The Rockets with an Impregnable Defense

The Toledo Rockets took to the pitch last week to avenge the embarrassing loss they had sustained to Bowling Green in 2019. Quarterback Eli Peters made 20 passes for 214 yards, with 4 touchdowns and no interceptions.

The game will see the return of senior running backs, Bryant Koback and Shakif Seymour to the attack. Koback, one of the best offensive players in the MAC as a junior, racked 1,187 rushing yards and 14 touchdowns in 2019, with Seymour coming into this game with 23 career scores.

The Toledo Rockets are ranked 7th in defense and the same in offense on the NCAA tables.

The Toledo Rockets will be looking to improve after a 6-6 season with quite a number of injuries last year. The Toledo Rockets were once the favorites to win the MAC West Division, but things took a different turn, starting with a loss to the Bowling Green Falcons and ending with a final 3 games consecutive loss with a 6-6 overall record. However, the team is looking strong this year, with high hopes to achieve a lot this season and they are off a good start.

And the Winner is?

This game might come down to who can move the ball through the air. Western Michigan Broncos has a firm defensive line and an offense with the potential to make big plays on the outside.

Tonight, two pitchers whose records could use a little polishing match up as the St. Louis Cardinals welcome the Miami Marlins to Busch Stadium to open a three-game series. Cardinals hurler Adam Wainwright has not picked up a win since May 20, while Pablo Lopez’s win in his most recent start last week was his END_OF_DOCUMENT_TOKEN_TO_BE_REPLACED