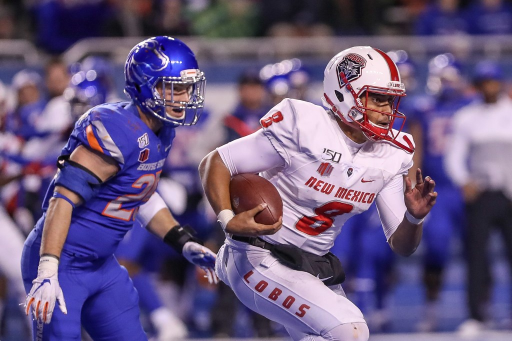 As seen on FanDuel

The New Mexico Lobos struggled hard in their game against the Air Force Falcons, who scored up to 28 points and subsequently had 422 yards of offense. On the overall, New Mexico has allowed an average of 33 points and 474 yards of offense. The team’s linebacker, Brandon Shook, led the defense with 19 tackles in this game and 37 tackles. The team was able to access the Air Force backfield multiple times with DE Joey Noble and DB Patrick Peek, both recording tackles for loss.

The rest of the team looked good as Tevaka Tuioti completed about 56.1% of his passes for 475 yards, and alongside Trae Hall, they had a combined total of one interception and four touchdowns. Andrew Erickson had eleven receptions, Emmanuel Logan-Greene and Jordan Kress had a total of two touchdowns and 443 receiving yards. Emmanuel managed to bring in three catches for 64 yards. Jerrick Reed II got three interceptions, and Joey Noble had two sacks.

Although, in the game against Air Force, quarterback Trae Hall found it difficult to find consistency for his team, considering he connected only 23 of his 42 pass attempts, with one interception and 221 yards covered.

Would Utah State Get its First Win?

Utah State is coming to this game looking for a win after their recent home loss to Fresno State Bulldogs with a 35-16 scoreline. The team’s quarterback, Jason Shelley, found it difficult to generate much of an offense as he connected only 9 of his 24 pass attempts for the period of 144 yards. However, the team has several excellent players. There is Jaylen Warren, the running back who had a productive game as he ran for 135 yards and had a touchdown on nine carries. They also have DB Dominic Tatum & LB AJ Vongphachanh, who were able to lead the way for the team’s defense with a total of 17 tackles. DB Shaq Bone also had a lone interception in the game.

With regards to its defense, Utah State struggled in their last game against the Fresno State Bulldogs, allowing them to score 34 points and gather up 541 total yards of offense. It is expected that they would struggle in future games as they would be recovering from the dismissal of their star quarterback, Jason Shelley. At the start of the season, their coach was laid off, and as such, they are currently having to work with a new coach and would also be working with a new quarterback to the mix. That must be creating quite a complication for the team.

Utah State is the team with the most recent wins between both teams. However, they are just getting to settle with working with an interim coach and a new quarterback. So, they have little time to build up their teamwork and improve their coordination as a team, as even the best teams could lose a match due to poor coordination. For this reason, while New Mexico might be coming from a string of losses, they are viewed as the better team and the more coordinated one, so they have a chance at successfully breaking through the Utah State’s defense.