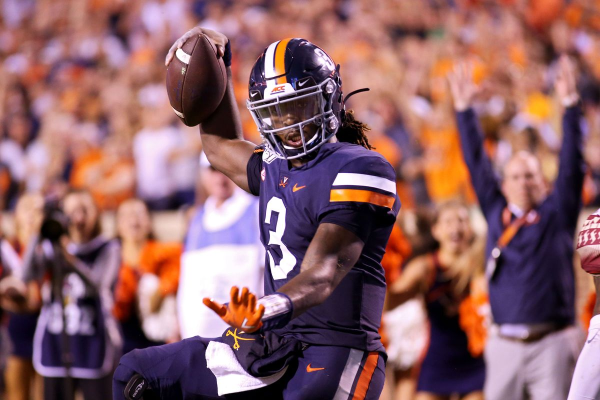 Week five of the college football season is here, and there are some juicy matchups on the schedule. None of the matchups are bigger than a huge top-25 showdown between the Notre Dame Fighting Irish and the Virginia Cavaliers.

Both of these teams have hopes of breaking into the College Football Playoff this season, but they are going to need a victory in this game to get it done. No. 10 Notre Dame was one of the best defensive teams in the country a season ago, and No. 18 Virginia is looking like that kind of team this season.

Notre Dame had a chance to move way up in the rankings last weekend, but a tough loss to Georgia has them currently ranked at No. 10. The Fighting Irish come into this game with a record of 2-1, but another loss will knock them out of playoff contention.

Virginia enters week five with a perfect 4-0 record, and the Cavaliers already have a few nice wins on their resume. The Cavaliers knocked off Pittsburgh in week one, and Florida State in week three and come into this game battle-tested.

Notre Dame returns home for this one and is currently a 12.5-point favorite over the Cavaliers.

Book Needs Some Help on Offense

Notre Dame has an extremely talented quarterback in Ian Book, but he hasn’t been getting a lot of help this season. Book has thrown for 828 yards and eight touchdowns so far this season, and he can also get the job done with his legs. The big quarterback has racked up 145 yards on the ground and is averaging over five yards per carry. Running back Tony Jones Jr. leads the team with 148 rushing yards, but Notre Dame needs to get more production from its running game.

The Fighting Irish have been pretty solid on defense this season, but there is reason to believe that they can be better. Notre Dame is allowing just 18.0 points per game this season, and they held a talented Georgia team to just 23 in that loss. Getting pressure on opposing quarterbacks has plagued them this season, as they have just four sacks as a team.

Virginia Defense Has Been Tough to Beat

Virginia is also allowing just 18.0 points per game this season, but they have played some pretty talented offenses. The Cavaliers have recorded a whopping 20 sacks so far this season, which averages out to five per game. Virginia should be able to get some pressure on Book in this game, and that could throw a huge wrinkle in the Notre Dame gameplan. Head coach Bronco Mendenhall is known for his terrific defenses, and his team has been one of the most dominant in the country this season.

The Cavaliers have averaged over 35 points per game on offense this season, but that is not their best aspect on this team. Quarterback Bryce Perkins has passed for over 800 yards this season but has thrown four interceptions. Virginia will need to run the ball better in this game to try to keep the explosive Notre Dame offense off of the field.

The Virginia Cavaliers might be the 18th-ranked team in the country this season, but they aren’t getting much respect by the sportsbooks in this game. Virginia will obviously be facing its toughest opponent in this game, but they have what it takes to compete. Notre Dame has been far from perfect this season, and they still have some question marks.

The Fighting Irish are almost impossible to beat at home, and that will hold true in this game. Notre Dame will find enough offense to win this huge showdown, but it will be close. Take the +12.5 points given to Virginia and pick them to win this game.