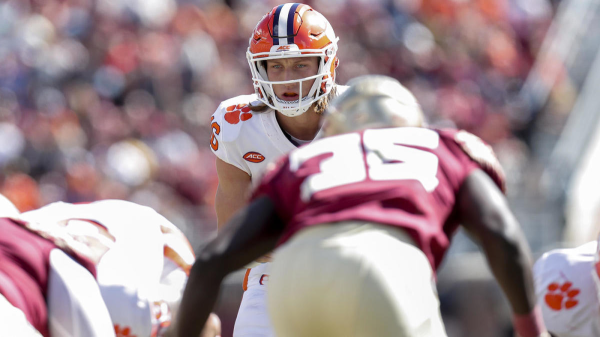 The Clemson Tigers (7-1) will be heading to the Bobby Bowden Field at Doak Campell Stadium, Tallahassee, Florida, the USA, on Saturday the 21st of November, to face the Florida State Seminoles (2-6) in a Big Ten college football matchup. The game will begin at 12:00 PM EST and will be covered by ABC TV Channel.

Trevor Lawrence back to lead the Tigers to victory

Tigers star QB, Trevor Lawrence, is back after being diagnosed with COVID-19 and missing the team’s last match against the Notre Dame Fighting Irish, which the Clemson Tigers lost 40-47 to the Fighting Irish. In Trevor’s absence, backup QB D.J Uiagelelei took over, passing for an impressive 439 yards with 2 touchdowns. RB, Travis Etienne, led the team in rushing yards covering 28 yards with 18 attempts and secured a touchdown, while Tigers wide receiver Cornell Powell caught 6 balls for 161 yards with 1 touchdown.

The Clemson star QB, Trevor Lawrence, has been essential to the team this season, passing for 1,833 yards with 17 touchdowns and 2 interceptions. Lead rusher, Travis Etienne, leads the team with 121 attempts for 634 yards and 10 touchdowns on the ground. In receiving yards, Amari Rodgers is in the lead this season with catching 48 balls in 720 yards and scoring 6 touchdowns.

The Tigers this season have accumulated an average of 45.4 points per game, and the team’s average in total yards stands at 503.6, with 353.6 average in passing yards and 150.0 in rushing yards.

While fending off their opponents, the Clemson Tigers have proven strong, only allowing an average of 19.5 points per game. In total yards, the team has allowed an average of 305.1, 191.8 in passing yards, and 113.4 in rushing yards.

Will the Florida State Seminoles break their losing streak?

The Florida State Seminoles are coming off a defeat in their most recent game against the NC State Wolfpack, which ended at 38-22. In the game, QB, Chubba Purdy, led the team throwing for 181 yards and scoring 2 touchdowns, while RB, Jashaun Corbin, rushed for 77 yards with 14 carries, averaging 5.5 yards per carry. Ontario Wilson led in receiving yards with 7 catches for 117 yards.

On offense, the Florida State Seminoles are really struggling, averaging 22.0 points per game, with an average of 381.0 yards total, 186.0 in passing yards, and 184.4 in rushing yards. The leading QB this season, J. Travis, has gained 864 yards in passing with 4 touchdowns and 5 interceptions. Travis also happens to be the season leader in rushing yards with 85 carries for 469 yards and 6 touchdowns on the ground. WR Wilson is leading with 28 receptions for 332 yards and 2 touchdowns.

QB, J. Travis, and WR J. Young will possibly be absent from Saturday’s game. Meanwhile, M. Wilson (DT), D. Love-Taylor (OL), and J. Blackman are definitely out and will not be playing on Saturday.

The Florida State Seminoles have been struggling throughout the season and do not look very strong. Meanwhile, the Clemson Tigers have the firecracker of a quarterback and look ready to take on just about anything, even with the number of injured players on their end.