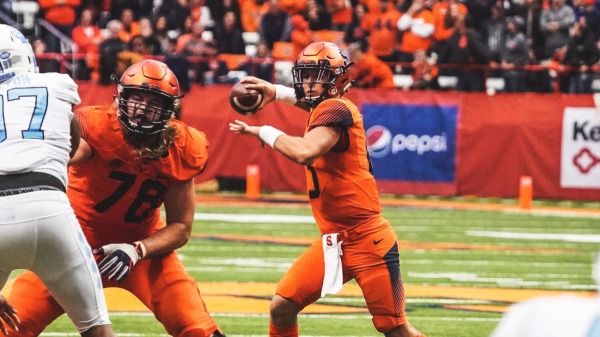 The Clemson Tigers, the nation’s No. 1 team in the AP Poll, will face their toughest challenge of the season on Saturday. Clemson will travel to the Carrier Dome to battle against Syracuse, a team who beat them two years ago and who almost beat them last year as well. Will Clemson exorcise their demons against Syracuse for good, or will the Orange continue to give the Tigers more than they can handle?

Here’s a quick preview going into Saturday night’s game, as well as who will leave the stadium with a win.

The defending champions are at the top of the college football mountain. The Tigers have rolled through their first two games of the season, destroying Georgia Tech 52-14 and then shutting down Texas A&M 24-10. But Syracuse has proven to be a tough test for the Tigers, where last year’s win needed a miraculous fourth-down conversion to happen.

However, there is one big difference from last year’s matchup versus this year. When these two teams met last season, it was in the wake of Kelly Bryant announcing his decision to transfer. Then-freshman quarterback Trevor Lawrence got hurt in the game, forcing Clemson to run the ball a lot and beat Syracuse on the ground. Now with Lawrence, who’s developed into one of college football’s top QBs, the Tigers should be able to bring an upgraded offensive attack into the game.

The strongest facet of Clemson’s game is once again its defense. The Tigers lost their entire starting defensive line from last year to the NFL, but coach Dabo Swinney has a new group up front that can unleash fury on opposing offenses. In one of the season’s most anticipated games early on, Clemson’s defense held Texas A&M to three points for much of the game.

Last year against Syracuse, the defense was off its game, and the offense was trying to adjust with a new QB. We’ll see if history repeats itself this Saturday.

The Orange are trying everything they can to forget last week’s blowout loss against Maryland. After shutting out Liberty 24-0 in Week 1 and becoming ranked, Syracuse was blown out by the Terrapins, allowing 63 points in a disastrous game. But they have seemed to play their best against Clemson, which includes an outright victory over them in 2017.

A big reason they almost pulled off the upset against Clemson last year was due to their tenacious pass rush. That rush has beat up on Bryant and knocked Lawrence out of action in the last two years. For Syracuse to pull off the upset, the pass rush will need to be spectacular once again. If it’s not working, as exposed by Maryland’s quick-hitting offense last week, Clemson will be able to dominate possession and therefore the game.

Offensively, Tommy DeVito leads the Syracuse offense under center. In a game that was a blowout from the start last week, DeVito threw for 330 yards and three touchdowns. It will likely take more than that for the Orange to take down Clemson; however, Syracuse has an offensive line in front of DeVito that has done a pretty good job of protecting him so far. They will have to play the game of their lives against Clemson’s monster line on the other side.

Currently, Clemson is a 28-point favorite on the road, with the total over/under set at 62.5 points. Clemson covered against Georgia Tech but failed to do so against the Aggies thanks to a last-second desperation touchdown.

As for Syracuse, they covered as the favorite against Liberty but were blown out last week against Maryland. However, they have shown no problem playing their best against Clemson, which is making them a popular pick to cover once again.

Clemson lost a lot of defensive stars and has failed to really find its footing on offense in the early going. That will all change on Saturday. Expect Lawrence to finally break out and lead Clemson to a big victory, making sure the Tigers never hear about their struggles against Syracuse again. Clemson wins the ballgame 45-14.