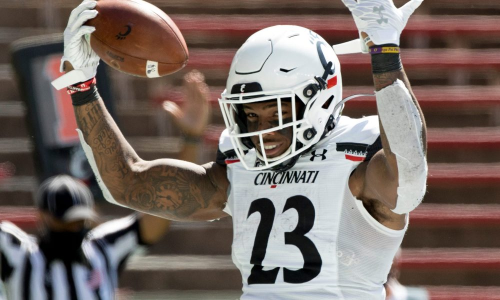 This is a great game for the AAC with two ranked, unbeaten teams hooking up on Saturday night in Texas. Cincinnati has been been building their program under Luke Fickell for some time and this season looks like a chance for them to upend past the stranglehold that UCF and Memphis have had on the league. It might not be that simple though, as SMU also looks like it could be the best team in the American this season.

The Cincinnati Bearcats are a very solid team. They are 3-0 SU to start the season, though that record drops to 1-2 ATS. Despite the wins they have not been playing up to expectations. While the defense has been very impressive, limiting Army to 10 points and USF to 7, the reason they have been disappointing the markets is that the offense has failed to come together. If they were playing strong defenses that would be one thing, but they aren’t. If you take away the game against Austin Peay, they have not scored more than 28 points yet.

SMU is a perfect 5-0 SU to start the season, but but saw their three game ATS streak end last week in a close win over Tulane. The Mustangs have been very consistent on offense this season, scoring at least 30 points in every game. This including a nice, close win over Memphis a few weeks back. That Memphis game stands out for the defense too, as the Mustangs held the Tigers to just 27 points. That same Memphis team went nuts last week against UCF, with more than 700 yards of offense with 50 points. Limiting them like they did was impressive.

This one opened with Cincinnati being a slight favourite on the road at -1. Now things have shifted in the opposite direction, but I am still loving the value of the home side as a small favourite in this game. Cincinnati may be a very good defensive team, but SMU gets opponents because they are so balanced. They can run the ball really well, averaging more than 200ypg on the ground, and are 5th in passing offense.

QB Shane Buechele should easily outplay his counterpart Desmond Ridder, who has been a disappointment this season. Also, Cincinnati is built to play with the lead; they want to be patient and rely on their defense to set up the offense. If they have to play from behind I think they will struggle. It might not be on the first series, but SMU will figure out what is working and be able to keep the Bearcats guessing. They will score and put pressure on Cincy.

With the small ATS spread comes a small spread in the money line values too. I really like the Mustangs to win the game and cover the spread so I am liking the value on the money line too. Cincinnati is definitely capable of the upset win; there are reasons they were the early favourite, and they have a higher ranking than SMU right now. The price is solid but there is better value with the home side. You can lock in that money line over the spread if you think this one could hinge on a missed extra point or something. The last two times these programs met, the game went into overtime (2017 & 2018)

Since helping form the AAC, these programs have met four times, with every game going under (even those two overtime games). With the exception of the last game, all of them were lined in the 60s. Game stats show that Cincinnati was the better offensive team in those tilts, out-gaining the Mustangs each time, but struggling to score. This year I think we see the reverse. I expect SMU to be the better offensive team and to establish an early lead that is going to force Cincinnati out of its comfort zone. When that happens it will create scoring, and either the Bearcats will be matching scores or turnovers, and short drives will set up an SMU offense that is very capable. This number has already dropped a couple of points from the opener so you are getting even more value here. Look for the first over in the series.