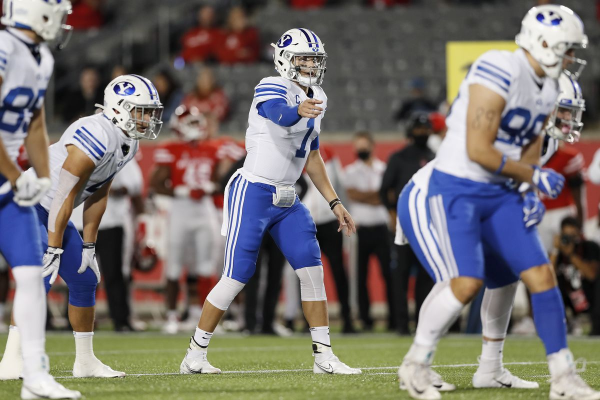 BYU, popularly known as the Cougars, are playing host to Western Kentucky, popularly known as the Hilltoppers, in an inter-conference game. The game will kick off on Saturday night at around 10.15 pm EDT. The Western Kentucky Hilltoppers will be in for a tough match due to the BYU Cougars’ current form. On the other hand, it will be even tougher for the Hilltoppers, considering that they are among the teams with one of the lowest scoring percentages in the league. In their last match the previous week, they only managed 13 points against Chattanooga, a non-FBS opponent.

The BYU Cougars are on a winning run as they continue to rise in the rankings of AP Top 25. They are regarded as a serious contender now, and in their previous match against Texas State, they amassed 38 points to remain unbeaten. The only question in this coming game now is whether they will add another win to their books with more than 30+ points.

BYU has got their offensive strength to thank for the good season they are having. Zack Wilson, their star quarterback, leads the team’s offense and has had a great season so far. The quarterback has managed to complete approximately 78% of the passes he has attempted at a distance of 2,000 yards. He has also had a throwing for 16 touchdowns and a single interception. Their star man had performed extremely well when the team needed him most.

Generally, the cougars have not encountered such issues in moving the ball this season. Their offense has been perfect in almost each of the games they have played. The team has had 547.3 total yards and 45 points per game on average. This puts them roughly in position six in the total yards chart and the top 10 in the scoring charts.

Western Kentucky goes into this game with an unconvincing win against a non-FBS team. They had previously been on a two-game winless streak. The team has struggled throughout the season to get their forward line up and running. Pigrome and Thomas, who are both quarterbacks in the team, have been given some significant playing time this season, but still, the results haven’t gone their way. Pigrome’s stats are good compared to Thomas, and he has managed to post around 600 passing yards. The team has generally struggled offensively and have only gotten 17.7 points per game on average. This score puts them roughly in position 12 in the scoring charts.

The BYU cougars are the most hit when it comes to injuries. They have several players out of this game due to injuries, while others are questionable due to minor injuries they suffered during previous games. The Cougars have close to 12 players with minor and long term injuries. Western Kentucky’s injury worry is only on Dalvin Smith, who is out with a leg injury.

On the other hand, BYU has a 5-1 ATS and have been mercilessly beating their opponents in the league. Their defense marshaled by Kalani Sitake is expected to run the show in this game and hold their opponents to fewer points as they have done in games this season. They have surrendered fewer yards per game this season, with the average standing at 285.

In Western Kentucky vs BYU game, BYU is expected to carry the day since they understand the opportunity that lies in front of them. The team is also eager to showcase their talents and skills to the fans and will overrun their opponents. This will translate to a huge win for the BYU Cougars.