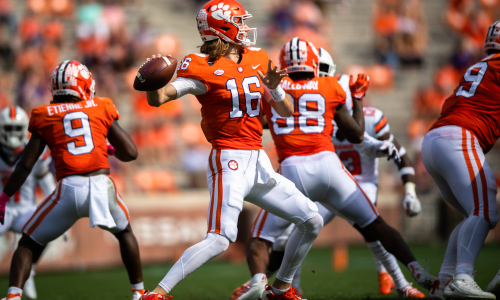 The #1 ranked Clemson Tigers will face off against the unranked 4-2 Boston College Eagles on Saturday at 11:00 am CST.

The Tigers have been on a rampage this season, boasting their sixth 6-0 start in the last sixth seasons. The Tigers are coming off an easy 47-21 win last week against Syracuse. Trevor Lawrence threw for 289 yards, two TD’s, as well as one INT in the game. On the ground, star running back Travis Etienne ran for 106 yards on 19 carries, finding the endzone three times.

Boston College is coming off their biggest offensive game of the season against Georgia Tech (48-27). Quarterback Phil Jurkovec is leading a promising campaign for The Eagles in 2020, throwing for 1,671 yards and 12 TD’s in just six games. In his most recent game, Jurkovec threw for 171 yards, completing 12 of 18 passes, with two TDs and a pick.

The two ACC schools have met a total of 29 times, with Clemson having the more favorable record at 18-9-2. The last nine meeting have resulted in Clemson victories, with the last BC victory coming in 2010 when The Eagles won 16-10.

Why Clemson Will Win

Their quarterback. Clemson is primarily known for their lights out offense. So far this season the offense is averaging 518 yards of total offense, with 305.5 of those yards coming from Trevor Lawrence. The golden haired Heisman favorite has thrown for 1833 yards, completing 70.7 yards and boasting a 17:2 TD to INT ratio. In his two meetings against BC, he has thrown for 570 yards, 4 TD, and 1 INT, giving him an all-time record of 2-0 against The Eagles.

Why Boston College Will Win

Listen: Crazier things have happened, and the college football world is no stranger to massive upsets. Remember in 2007 when Appalachian State beat Michigan? They were +33 point underdogs and eventually won the game 34-32.

Their run game. During their last game against Georgia Tech, BC was able to put the ball on the ground for 264 yards. By spreading out the Tigers defense with jet sweeps and hiding fakes, the run game might have a chance. They can also use this game to bleed the clock, a usual necessary element to upset.

Their head coach. Jeff Hafley is very familiar with Clemson. The former Ohio State Defensive Coordinator met the Tigers in the Fiesta Bowl last year, where he held their offense to 417 total yards. His defense held Trevor Lawrence to just 18 completions, 259 yards, and 2 TD’S. More impressively, they held Travis Etienne to a measly 36 yards.

I just do not see a world in which it is smart to bet against Clemson in this situation. With their extremely high powered offense and solid defensive core, I believe this game will belong to the Tigers from start to finish. I do not expect the Eagles to rack up a big number of points, and though the under is a little low, their offense will be smothered all game.