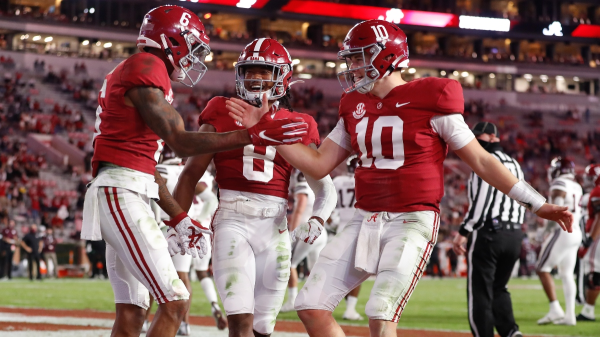 The undefeated Alabama Crimson Tide are set to take on the 4-2 Auburn Tigers on Saturday in what has become known as the Iron Bowl. While the annual contest is consistently touted as one of the most rivalries in the history of college football history, this year’s edition might just end up being a one-sided blowout.

Not only is that evident by how monstrously powerful Alabama has proven to be on offense, but also by how good their defense has been as well. Keep in mind that this is a team that has outscored their opponents 346-135, and two of those games were against ranked opponents. If nothing else, Alabama is proving that they are a force to be reckoned with every single weekend.

The best example of this is Alabama’s game against Texas A&M, who were ranked 5th, but got blown out 52-24 by the Tide. It’9s worth mentioning that Texas managed to keep the game close in the first quarter, but the combination of Mac Jones and Najee Harris was just too much. Unfortunately for Auburn, they are probably going to face the same fate on Saturday.

As for the Auburn Tigers, they come into the Iron Bowl with a 3-game winning streak, but they lost to the unranked South Carolina Gamecocks earlier this season. They were also held to six points in a 27-6 beatdown by the Georgia Bulldogs, which just goes to show how much this team has struggled.

Nick Saban testing positive for Covid-19 could present a bit of a setback for Alabama this Saturday, but it should not be that much of an issue. In fact, with offensive coordinator, Steve Sarkisian set to lead the team into battle, one would assume that they are in good hands. One can also probably assume that Sarkisian knows what makes this Alabama team great and will utilize it during the game.

Think about it. From being on the sideline with Saban, to the phenomenal job he has done with the offense, Sarkisian knows the ins and outs of this team. Furthermore, Sarkisian has learned a lot from Saban, and will know exactly how the team should respond to various situations. There might be a feeling out period in the beginning, but expect the Tide to get the ball rolling quickly.

Looking at the Tigers, and it comes down to whether the team studied enough game tape to stand a chance against this juggernaut of team. It is also a matter of whether they can effectively pressure Mac Jones into making mistakes, and contain Najee Harris. If they can somehow manage to do that, they could end up winning the Iron bowl, and upsetting the #1 ranked College football team in the nation.

With all that in mind, it should be beyond clear that these are two vastly different teams right now. One is struggling to find its place in the SEC this year, while the other is dominantly trotting along like the championship game is a lock. This creates two vastly different mindsets heading into Saturday’s game and it could end up hurting Auburn if they choose an aggressive strategy

For example, if Bo Nix goes into the game wanting to have a shootout with Mac Miller, he is going to get picked off like he did in his loss to South Carolina. Therefore, Nix has to be incredibly careful about where he places the ball when trying to make his way down the field. He also needs to get the run game involved, and hopefully try to chip away at the Alabama defense. That will be easier said than done though, and will require a great deal of luck on the Tigers part.

The Crimson Tide are favored to win Saturday’s Iron bowl by 23.5 points, which seems realistic based on what Alabama has done so far this season. The moneyline lists Auburn at +920 and Alabama at a whopping –2000. The over/under for the game is 62.5, making the possibility of a blowout highly likely.

As for who gamblers are placing their bets on, 62% off all the money wagered on this game is being put on Alabama, while 38% seem to think that Auburn pulls off an upset. Although an upset would be nice to see, especially with how cathartic it was to watch it happen in 2013, it just does not seem very possible with the factors at play.

If you believe in that anything can happen mentality, feel free to put some money on the Tigers and collect a nice return if they win. For anyone looking for a safe bet however, they might just want to put a decent size of money on Alabama, and let the most predictable outcome happen.

In the end, it comes down to what you are looking for out of this game. If you think this is the week Alabama gets caught, feel free to place your bet on the Tigers. Who knows! You could walk away with a nice chunk of change. Otherwise, you are much better off going with the safer bet of the Alabama Crimson Tide.