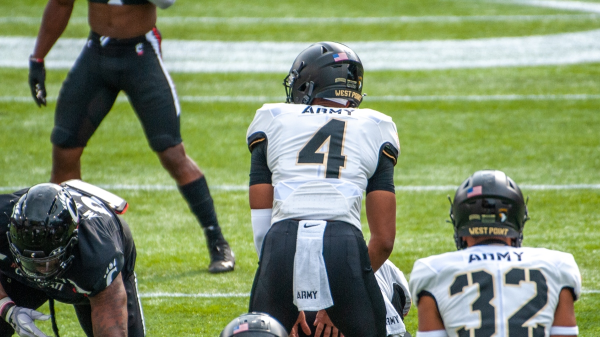 The game will be held at one of the two schools for the first time since World War II; COVID-19 restrictions in Philadelphia, where the game was set to be played, caused the relocation. The Army Corps of Cadets and Navy Brigade of Midshipmen will be in attendance for this one at Michie Stadium in West Point, New York.

The Year, to Date

Navy head coach Ken Niumatalolo’s program went 11-2 a year ago. At 3-6 this season, it’s been a step backward for the Midshipmen. Of course, that’s somewhat to be expected after losing the terrific, talented, do-it-all quarterback Malcolm Perry (now WR with Miami Dolphins) to graduation. Navy began the year with a 55-3 blowout loss at home to BYU. Coming into this game, the Midshipmen have lost four straight, struggling to offense in Perry’s absence.

It’s been a more positive season for Army head coach Jeff Monken, who has the Black Knights 7-2 in his seventh season in West Point. Army’s only losses have been at Cincinnati and at Tulane. However, Army plays a far easier schedule than do their football foes from Annapolis. Beyond the Bearcats and Green Wave just mentioned—programs in the American Athletic Conference, of which Navy is a part—Army’s toughest competition this season has likely been Georgia Southern.

Odds for Army vs Navy

In the absence of the aforementioned Perry, Navy has struggled all year on offense. The Midshipmen currently have the nation’s 123rd best offense and rank, uncharacteristically for the program, just 47th in rushing. Inconsistency at quarterback has been part of the problem—SR Dalen Morris, JR Tyger Goslin, and FR Xavier Arline have all taken snaps under center in 2020. One, two, or all three might have their hands full this weekend against an Army defense that ranks 4th in America. Navy’s offense versus Army’s defense will be perhaps the pivotal showdown of this meeting.

If Navy’s offense has struggled, Army’s hasn’t been much better with a unit that ranks 103rd nationwide. They’ll face a Navy defense positioned 67th in the country.

Despite lofty numbers for the Army defense, they’ve come against inferior competition but for Cincinnati and Tulane, who respectively beat the Black Knight by multiple scores. Navy is just 3-6 but has been far more tested in the challenging American Athletic Conference. That said, on the heels of four consecutive losses, can the Midshipmen rally to beat Army for the second year in a row? Alternatively, will Army continue its winning ways and sink Navy on its home field?

7.5 points in favor of the home team seem reasonable from the oddsmakers. And a Navy offense that hasn’t seemed to find its way in 2020 seems likely to struggle against an Army defense that’s kept most opponents, although often less talented, at bay. Army 21, Navy 17.