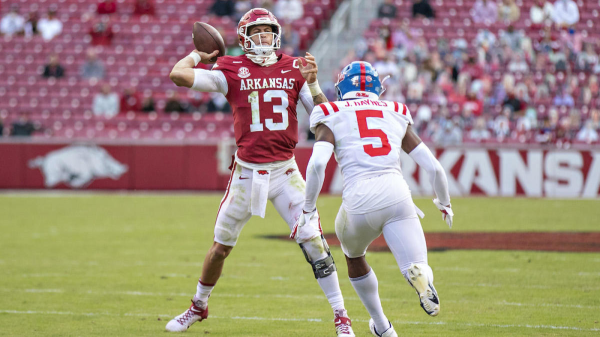 After losing at Texas A&M last month, Florida’s hopes of being a playoff contender were in serious peril.

But after a dominant rivalry win over Georgia last weekend, the Gators are back in the thick of the playoff picture. They found themselves down 14-0 barely three minutes in but were in control from there in a 44-28 statement win.

With a very favorable schedule ahead, Dan Mullen’s squad could be in line to have a lot to play for if they reach the SEC Championship Game next month. Next up for Florida is a meeting with a familiar face. Feleipe Franks started last season as the Gators’ starting quarterback, but a season-ending injury opened the door for Kyle Trask’s emergence and Franks’ eventual transfer to Arkansas.

Franks has been a big part of Arkansas’ return from the wilderness. Following a comeback win over Tennessee, the Razorbacks hit the road at 3-3. The Vols led 13-0 at the half, but a 24-0 blitz in the third quarter made all the difference.

Does Arkansas have a chance at all to pull off an upset in Gainesville? Or will the Gators hold serve at home and continue their charge toward the top four?

Will the Trask train keep rolling? Trask has shot up the board as a potential Heisman Trophy candidate and an NFL prospect with a string of impressive performances this season. Against Georgia, he threw for a career-high 474 yards and recorded a fifth straight game with at least four touchdown passes.

On the season, Trask has thrown for 1,815 yards and 22 touchdowns. If the Gators can run the table and then win the SEC championship, Trask will have as good a case as anyone to take home the Heisman.

Arkansas has actually been pretty good against the pass this season. A beleaguered Tennessee aerial attack managed only 107 yards on 11 of 21 between three quarterbacks. And with two interceptions, the Razorbacks lead the FBS in interceptions with 12.

That is all very nice, but they have not faced as good as Trask yet (no offense to Texas A&M’s Kellen Mond).

Can Arkansas produce on offense? Realistically, it is tough to see Arkansas being able to slow down this Florida offense. So some points will need to be scored to hang around in this one. They are capable of doing so, and they are facing an opponent that has allowed 24 or more points four times this season.

He threw three touchdowns passes in the third quarter to give Arkansas control against Tennessee and now has three games this season with three or more scoring tosses. In his time at Florida, he achieved that feat only four times in 27 games.

Franks has done well with minimizing mistakes, turning the ball over only twice in his last five games since throwing two interceptions in a season-opening loss to Georgia. Will a return to old pastures bring nerves?

On the ground, consistency and production were hard to come by early. But after putting up 222 yards against Texas A&M, Tennessee got gashed for 198 yards. A balanced attack could help the Hogs have a shot into the second half.

Will Sam Pittman’s absence affect Arkansas? While a number of games around the SEC and the country are being postponed or canceled due to COVID-19, this game is still on despite Arkansas coach Sam Pittman being diagnosed with COVID.

His squad will be disappointed to have to make this trip without its leader, but it should not have an effect on how the game goes down. With or without their coach, they are up against one of the best teams in the country. It is a momentous challenge either way.

Florida -17: The Razorbacks have held their own against some quality opponents this year. They hung with Georgia and Texas A&M for a half, and they very nearly pulled off a big upset at Auburn. It will not be a surprise if they stick around for at least a little while.

But this is the best team they have faced to date, and they will be hard-pressed to slow down Trask enough to cover.

Florida averages 42.4 points per game and has scored at least 38 points in every game thus far. Expect that production to continue. But they also give up an average of 29 points per game, so it’s likely Arkansas will get their share and could hang around for a while. On that note, the over 60.5 is also worth a serious look.

In the end, the Gators will feast on the Hogs and stay on course in their hunt for an SEC title and a national title.