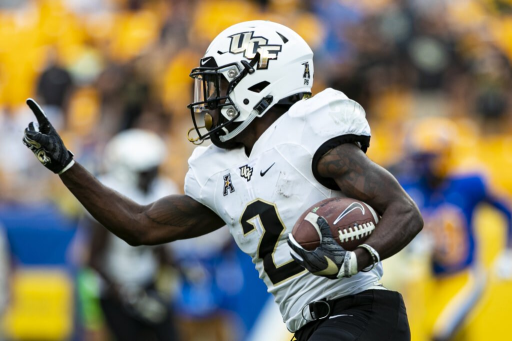 This is an interesting week of the college football season with the Big Ten finally joining the fray on Friday night. On Thursday night, we have a matchup of Sun Belt contenders Arkansas State and Appalachian State. This is the only game of the night so hopefully, we get some good action.

Arkansas State has put up some interesting results this season. They are 3-2 SU/4-1 ATS, including a win over Kansas State that looks good with the Wildcats currently undefeated in the Big 12. After last week’s high scoring win over Georgia State, 59-52, ASU is 1-1 in the conference. The Red Wolves are third in the nation in passing and averaging 38ppg. Unfortunately, their defense has been more than willing to give opponents chances to score too. They are giving up 39ppg.

Appalachian State is 2-1 SU/0-3 ATS to start the season. For the second straight season, they have a new head coach in Shawn Clark (led them to a bowl win last year). There was a lot of returning talent so expectations remained high for the Mountaineers, especially with Zac Thomas being a senior quarterback Unfortunately, his play has not been that strong this season. In their lone loss App. State was only able to muster 7 points against a solid Marshall team. This is their first conference game of the season so a perfect time for a reset and they have had plenty of time to prepare.

The Mountaineers are significant home favorites here and that has to be a little worrisome given their ATS record this season. This line opened at -10 and has since been bet up so there is still confidence out there that App. State can be better than it has shown. App. State is one of the top running teams in the country and is very balanced on offense, but if you take away the 52 points they scored a few weeks ago against FCS Campbell their scoring is way down. If their defense cannot slow the Red Wolves’ third-ranked passing attack they are going to struggle to keep up. Their offense may be their best defense in this one.

Arkansas State has moved the ball on pretty much everyone this year, catching the markets by surprise, hence the 4-1 ATS mark so far. They are pass-heavy and scoring 38ppg so it will be on the defense if they are going to keep their covering ways on the road. Though in the same conference these teams do not meet annually. App. State has the lead 2-1 in the series with the last match being in 2018, a 35-9 win by the Mountaineers. That was two head coaches ago though, so it is hard to connect that game to this one in a meaningful way.

I am more partial to Appalachian State building towards the team I thought they would be in the preseason than I am Arkansas State being a juggernaut that is going to compete with Power 5 programs on the regular. I like this line better at -10 but will play it up to -13.5. The home side can win each half by a TD.

The Mountaineers should win this home game with relative ease, but I am not going to discount the Red Wolves’ ability to pull off an upset. They have already done it once this season winning outright against Kansas State when they were +19.5. A strong passing attack means they could be able to come back and there is value on that side at this price. Paying for App State on the ML is just not a good wager.

The Red Wolves have scored 50+ points in their last two games. Both went over and they are 4-1 to the over on the season. App. State also scored in the 50s in their last game against Campbell, nearly covering the total all on their own. That was an aberration though, they have been under the number in their other two games and prefer to play at a more measured pace. I am correlating this result with the expectation above which is the Mountaineers winning in a controlled fashion. They are going to be able to run the ball and bleed the clock, reducing the possessions for Arkansas State’s strong passing attack. That will keep the scoring in check too.