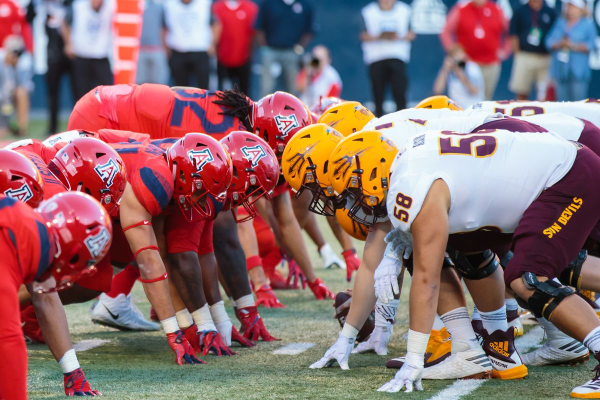 The 0-2 Arizona State Sun Devils are taking on the 0-4 Arizona Wildcats this Saturday, and this is going to be one of those games that are up for grabs. Not only is that clear by neither team managing to win a game yet, but also by how both have fared against ranked opponents. If nothing else, this game is the definition of a gamble and could come down to any number of factors.

For example, Arizona State took on #15 USC and came within one point of beating them. Unfortunately for the Sun Devils, they ended up blowing a ten-point lead in the fourth quarter that sealed their fate. Of course, they were able to pick off USC Quarterback, Kedon Slovis, once, but they still came away with a hard-fought loss.

The Wildcats took on USC also but came up short by 4 points after a grueling game. While the Wildcats would manage to put up 10 points in the final quarter, the Trojans scored 2 touchdowns and secured the win for themselves. This means both teams came close to defeating a ranked opponent but couldn’t pull off the upset when it came down to crunch time.

Then the Wildcats took on the #24 Colorado Buffalos and proceeded to get blown up by their run game. Arizona would lose the game 24-13, but none of that was due to Colorado’s Quarterback play. In fact, Colorado QB Sam Noyer went 12 of 19 for 119 yards, 0 touchdowns, and 2 interceptions. The team’s only saving grace was their run game, which managed 3 touchdowns and 410 yards on the Wildcats.

One of the biggest factors gamblers need to be aware of is how different these two Quarterbacks are when it comes to performance. Take the Sun Devil’s Quarterback, Jayden Daniels for example, who has 2 touchdowns, 1 interception, 359 yards and a passer rating of 76% in 2 games.

Now, compare that to, Will Plummer, who has 0 touchdowns, 3 interceptions, 305 yards, and a passer rating of 33.4 in two games. If nothing else, gamblers need to take into consideration that the Wildcats have a backup Quarterback that hasn’t had much field time lately. They also need to consider that he is a liability with turnovers, and that will play a factor in this game.

Then there’s the matter of how each team has fared against the run game. Again, ASU has only played 2 games, but have given up 4 rushing touchdowns this year. Although that might sound bad, Arizona has given up a total of 9 touchdowns in 4 games, which means ASU might have the advantage in that department.

Fanduel has listed Arizona State University at –500 odds, and Arizona at +360, but that could be due to the limited number of games each team has played. With that in mind, ASU is also favored by 11.5 points to defeat Arizona when it comes to the spread.

Finally, the over/under is listed at 56.5, opening the door to an offensive blowout of epic proportions. Whether that happens or not is anyone’s guess, but putting rivals up against each other usually brings out the best in everyone. It might even end up showing a side of them that hasn’t been seen before.

As fun as putting money on Arizona might be, Arizona State is going to be the safer bet of the two for several reasons. The first is that while Jayden Daniels has played the same amount of games as Plummer, ASU has the far superior Quarterback statically. Secondly, the Sun Devils also have a much better run game and are probably going to use that to slowly grind their way down the field.

Keep in mind that Arizona has given up a grand total of 1107 rushing yards in four games, which is 276 yards per game. That means the Wildcats are going to have an advantage when it comes to the run game, and can simply chew the clock while they move down the field. All they have to do is establish the ground game early, and they will come away with a win here.

In the end, rivalry games are always unpredictable, and you can come away with some good money if you turn out to be right. Who knows! Maybe Arizona can stop ASU’s run game, and Plummel can finally have a good game. Or, maybe Daniels isn’t as consistent as his statistics show, and he ends up turning the ball over. That could mean a victory for Arizona, and a good chunk of money for whoever took the chance.