Arizona State vs. Oregon State Preview: Will It Be a Second Straight Road Win for the Sun Devils? 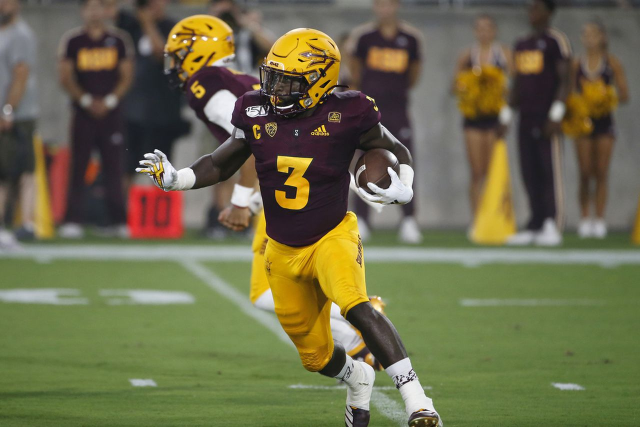 Oregon State and Arizona State have both played their share of close games this season, so the odds are high that their season-ending matchup will be a tight affair. The Beavers (2-4) welcome the Sun Devils (1-2) into Corvallis in a game that will kick off at 10:30 pm ET and be broadcast on ESPN. The Sun Devils, fresh off of a 70-7 rout of arch-rival Arizona in Tucson, are favored by over a touchdown over the home team.

The highlight for both teams this season was a rivalry win. Oregon State scored a 41-38 win over Oregon on November 27, but the Beavers have dropped their two games since. Arizona State, meanwhile, had lost their first two games of the season in heartbreaking fashion before ending Kevin Sumlin’s Arizona tenure with their biggest win ever over the Wildcats.

Who will take the win in this matchup? Will the Sun Devils move to .500, or will Oregon State send their seniors out on a winning note?

Arizona State comes into this game after a near-flawless performance at Arizona. The Sun Devils set the tone early, starting the game with a kickoff return for a touchdown, forcing a fumble on Arizona’s second play from scrimmage, then scoring on their first offensive play to take a 14-0 lead after only 56 seconds. Arizona State forced seven turnovers, four on Arizona’s first five possessions, and scored three touchdowns in each of the first three quarters in a record-setting performance.

Not only was it a rivalry win, but after losing to USC and UCLA in the final minutes, it had to feel especially good. ASU led USC 27-14 with three minutes left but allowed two touchdown passes on 4th downs to lose 28-27. Against UCLA, they rallied from a 17-0 deficit to lead but gave up a touchdown with 1:09 left to lose 25-18.

The Sun Devils are fairly balanced offensively, averaging 212.7 yards through the air and 227.3 on the ground. Running back Rachaad White leads the team both in rushing and receiving yards, with 29 carries for 262 yards and three touchdowns and six catches for 123 yards and a touchdown.

Defensively, they have allowed an average of 423 yards per game, though they held Arizona to only 350 yards last week. The Sun Devils have 21 tackles for loss and nine sacks in their three games, led by defensive lineman Tyler Johnson. Johnson initially planned to give up football after last season due to injuries, but he changed his mind and changed his position–from linebacker to defensive end–and it’s paid off, as he’s posted 7.5 tackles for loss and five sacks.

If Oregon State is to win, they will have to do it without several important pieces on both sides of the ball. Offensively, starting receivers Champ Flemings and Trevon Bradford are likely out, while star running back Jermar Jefferson’s status is up in the air after suffering a sprained ankle in last week’s 27-24 loss to Stanford. On the other side of the ball, linebacker Avery Roberts, the Pac-12’s leader in tackles, broke his arm against Stanford and is out. Also, starting cornerback Nahshon Wright is out after injuring his knee against the Cardinal. This is all in addition to losing starting quarterback Tristan Gebbia for the season due to a hamstring injury suffered late in their thrilling win against Oregon.

Junior college transfer Chance Nolan has started the last two games in Gebbia’s absence and has been decent, throwing for 423 yards and four touchdowns and rushing for 86 yards. Against Stanford, he was 17 of 30 for 221 yards and three touchdowns and ran for 50 yards on eight carries. Jefferson (755 yards, 7 TD, 6.9 yards per carry) and Bradford (24 catches, 239 yards, 1 TD) would be big losses if they cannot play. If Jefferson is out, junior B.J. Baylor (23 carries, 111 yards, 1 TD) is the next man up.

Defensively, the losses of Roberts and Wright subtract from a unit that has had its struggles this season, giving up an average of 31.2 points and 430.3 yards per game. The Beavers allow 191.3 rushing yards per game on an average of 4.9 yards per carry, which could be troublesome against a strong Arizona State ground game.

Oregon State +7.5 (-115): The Beavers have played tight games all season long, and even with some significant absences on both sides of the ball, another close game is in the cards.

Arizona State will be full of confidence after their performance against Arizona, and the Sun Devils are the stronger team offensively and defensively. The Beavers may be short on talent and bodies, but they are not short on the fight. The Sun Devils will come away with the win, but it will not be a second straight blowout.

After extending their hot and San Diego’s cold streak, the Seattle Mariners will be looking to leave Petco Park with a two-game sweep as they take on the Padres this afternoon. Yesterday, the Mariners pounded out a dozen hits and plated eight runs, and Chris Flexen pitched 6.2 shutout innings to collect his third straight END_OF_DOCUMENT_TOKEN_TO_BE_REPLACED