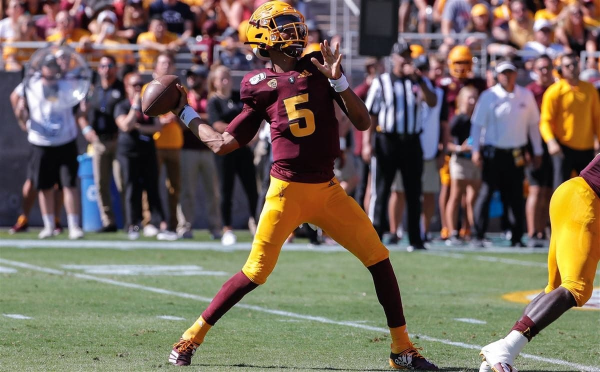 Saturday will feature a battle of Pac-12 South-leading teams as the No. 17 Arizona State Sun Devils (5-1, 2-1 in the conference) travel to Rice-Eccles Stadium to take on the No. 13 Utah Utes (5-1, 2-1). Obviously, this game has big ramifications not only for national standings but also for standings within the conference. Both teams will be looking to shut down the opposition with stingy defenses and will hope to create enough offense to walk away with a win. Kickoff for this one is scheduled for 6 pm ET.

Arizona State comes into this one having won its last two, over Washington State (38-34) and California (24-17). The Sun Devils’ only loss of the season was in a close 34-31 setback to Colorado. Still, they are looking for a signature win to help with their standing, and a win over Utah could do just that.

The Utes also come into this one having won two in a row, with wins over Oregon State (52-7) and Washington State (38-13). Their only loss of the season was to USC (30-23). Like Arizona State, Utah will be looking for that signature win in this one.

The Utah Utes come into this as heavy 13.5-point favorites playing at home. The over/under for points scored is set at 45.5.

While every team loves to win against a conference foe, it is even sweeter when you can do it on their turf. For the Sun Devils, that is exactly what they will be looking to do and will turn to quarterback Jayden Daniels to try to get it done. On the season, Daniels has thrown for 1,610 yards, eight touchdowns and an interception. He has also rushed for 198 yards and two touchdowns.

The leading rusher on the team, though, is Eno Benjamin. On the season, Benjamin has rushed for 529 yards and seven touchdowns. He has also caught 19 passes for 185 yards and two touchdowns out of the backfield.

Leading the way in the receiving stats is Brandon Aiyuk. Thus far this season, he has 31 catches for 651 yards and five touchdowns.

While the Utes’ offense has been impressive over the last few games, it is still their defense that is their calling card, and they will look to continue their success Saturday. They are especially tough against the run, as they have allowed just 52.8 yards per game to opponents (second in the nation).

On the offensive side, they are led by quarterback Tyler Huntley. Thus far, Huntley has thrown for 1,393 yards, nine touchdowns and no interceptions. He has also rushed for 197 yards and three additional scores.

On the ground, though, Utah is led by Zack Moss. This season, Moss has 514 yards rushing and six touchdowns.

This one really boils down to the defense for me. With both teams having elite defenses, points may come at a premium in this one (which is somewhat reflected by the over/under total). The lower the points scored, the harder it is to cover the spread, which gives the advantage for me to Arizona State.