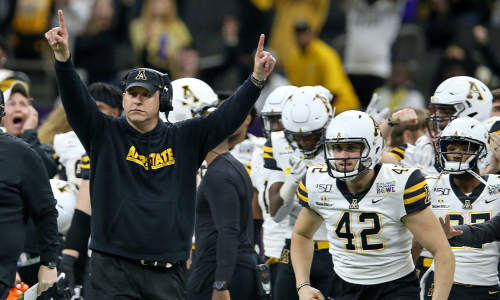 The Appalachian State Mountaineers will take on the North Texas Mean Green in the first-ever Myrtle Beach Bowl, on Monday, December 21, at the Brooks Stadium, Conway, South Carolina.

Both the North Texas Mean Green and the Appalachian State Mountaineers have not met prior to this game, and as such, this will be their first-ever meeting. North Texas snatched a win in their final regular-season game with UTEP, finishing with an overall record of 4-5. The Appalachian State finished the year with an 8-3 record, having lost two of its final four games, and were narrowly edged out of another Sun Belt Crown.

The North Texas Mean Green secured a spot at the Myrtle Beach Bowl after defeating UTEP by a 45-43 shootout victory. QB Austin Aune passed for 302 yards, completing 16 out of 29 passes made, with five touchdowns. Jaelon Darden registered 8 catches for 173 yards and four touchdowns, becoming the all-time leaders in North Texas history in most receiving categories. After the game against UTEP, Darden declared for the NFL Draft.

In their last nine games, Darden nipped 74 catches for 1,190 yards and 19 touchdowns, with Deandre Torrey and Oscar Adaway III churning a combined 186 carries for 1,131 yards and 8 touchdowns.

The availability of Jaelon Darden and Cam Johnson for the Monday game is in question.

Although they were trailing at halftime by 17-7, the Appalachian State Mountaineers closed the Sun Belt season with a victory against the Georgia State, last Saturday, by a 34-26 scoreline. Jalen Virgil created the momentum with a 10-yard kickoff return, and Nate Noel broke a 70-yard touchdown run on the first play of the Mountaineers to end the season with an 8-3 record. In the game against Georgia State, Zac Thomas threw for 208 yards completing 18 out of 29 passes made with two touchdowns and an interception, while Nate Noel rushed for 103 yards.