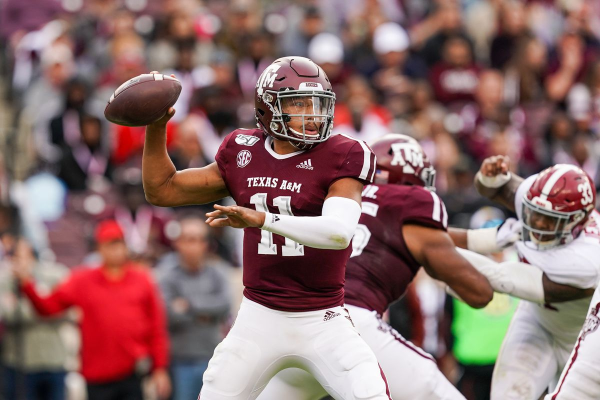 The Texas A&M Aggies will pay a visit to the Neyland Stadium in Knoxville, Tennessee, on Saturday, the 14th of November, for a showdown with the Tennessee Volunteers. The match will be held at 3:30 PM EST and aired on ESPN.

The Texas A&M comes into this weekend fixture on a four-game winning streak, having recently won South Carolina last week in a 48-3 scoreline. The Aggies led by 21-0 at the half and 41-0 in the fourth quarter before allowing the Gamecocks their first pity goal with six minutes left on the timer. The Aggies allowed South Carolina to just 150 yards of total offense, forcing them into two turnovers while securing 530 yards of total offense and 26 first downs against the nine allowed to South Carolina.

The Aggies quarterback Kellen Mond passed for 1,468 yards with 16 touchdowns, two sacks, and also had two interceptions. The Aggies leading rusher Isaiah Spiller had five touchdowns with 643 yards, while the leading receiver Ainias Smith had five touchdown receptions with 312 yards. Both Jalen Wydemyer and Chase Lane had 311 receiving yards and six touchdowns between them.

The Texas Aggies, having outgained four of their six opponents and outrushed five of their six competitors this season, are looking to tally up the numbers against the Tennessee Volunteers.

The Aggies lost badly to the number 1 team in the country, Alabama, six weeks ago, and since then have been on a winning streak with wins over Florida, Mississippi, Arkansas, and South Carolina, with intent to make it five in this fixture against the Tennessee Volunteers.

With a record of 5-1, The Aggies sit comfortably in second place in the SEC West, behind first place, Alabama Crimson Tide, with a game and a tie-breaker.

Tennesee Looking to Break Duck From a Losing Streak

The reverse is the case with the Tennessee Volunteers, who are on a four-game losing streak, after losing last week game to Arkansas by 24-13, amidst taking the lead in the half. The Volunteers were off to a good start this season with two consecutive victories at the start of the season over South Carolina and Missouri, and they dropped the ball and have lost four games straight to Georgia, Kentucky, Alabama, and Arkansas.

The Volunteers led the game against the Razorbacks by 13-0 at the half but went on to give consecutive touchdowns to the Razorbacks at their first three possessions in the second half.

The Volunteers have been outgained and outrushed in each of their last four games. They got outgained by the Arkansas Razorbacks by 413-292 and lost the battle of turnovers by 2-0.

The Volunteers leading rusher Eric Gray has 478 yards and three touchdowns, while the leading receiver Josh Palmer has 323 yards and four touchdowns receptions. On its defense, the Volunteers linebacker Henry To’o To’o and defense Trevon Flowers each lead with 40 tackles.

The Volunteers lost their quarterback Jarrett Guarantano to a head injury, and as such, his availability for this fixture is in doubt.

The Texas Aggies and Tennessee Volunteers have both played three common foes this season, with the Aggies having won against South Carolina and Arkansas and lost to Alabama. The Volunteers, on the other hand, have a win against South Carolina and two losses to the Arkansas Razorbacks and the Alabama Tides. The Texas Aggies are in a great position to win this fixture against the Tennessee Volunteers, but it is imperative to note the Volunteers run last season. They had started the season with a 1-4 record and went on to win seven of their next eight games. If they can play some defense and get their running game strong, the Tennesee Volunteers can make this tight.

We would, however, go with the Aggies on this one, as we see them securing a five-game winning streak.