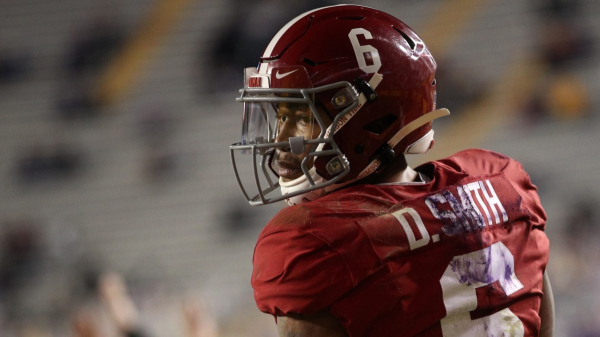 It has been a rather unique college football season, but as it reaches its climax, the Alabama Crimson Tide are once again on the verge of another shot at a national championship.

The nation’s #1 team has been a dominant force this season on the way to winning yet another SEC West title, and even an SEC Championship Game loss will not keep the 10-0 Crimson Tide from a berth in the College Football Playoff. The same cannot be said for their opponent in Saturday’s showdown in Atlanta, as the 8-2 Florida Gators need a win and a lot of good fortune to land in the CFP. The Gators have been one of the nation’s best offensive teams this season, but two close losses, including a stunner last weekend against LSU, have them on the outside looking in.

The SEC West has dominated the SEC title game in recent years, winning ten out of the last 11 matchups. Will that dominance continues, or will the Gators pull off a win to keep their slim CFP hopes alive?

Tide Dominant On Both Sides of the Ball

Alabama lost a number of key players on both sides of the ball after last season, and injuries this season have sidelined a few others. But the Tide is as dominant as ever. They come in averaging 49.5 points per game, which is third in the FBS, 537.8 yards per game (fifth), and 7.9 yards per play (2nd). Defensively, they are 11th in the FBS in points allowed per game (16.8) and tied for 11th in takeaways (19).

Offensively, Bama is led by the two Heisman Trophy front-runners, according to the latest Heisman odds. Quarterback Mac Jones, a -160 favorite to win the award, has thrown for 3,321 yards and 27 touchdowns this season. Jones is completing 76.4% of his passes and has thrown only three interceptions in 284 attempts. His favorite target is receiver Devonta Smith, who has 83 passes for 1,327 yards and 15 touchdowns. Smith, who also has a rushing touchdown and a punt return touchdown this season, is +200 to win the Heisman, surging up the board by scoring 12 touchdowns in his last five games.

All of the success of the aerial attack has somewhat overshadowed a solid ground game, which is averaging 190.1 yards per game. Leading the way is senior Najee Harris, who leads the FBS in rushing touchdowns with 22 and has run for 1,084 yards on the season.

Alabama surrendered 115 points in their first four games, but they have outscored their opponents 322-53 in the last six and a half games, starting with the second half of their 41-24 win over Georgia on October 17. A defense that averages 6.7 tackles for loss and 2.7 sacks per game is a big reason for that dominance.

Florida’s rise in the 1990s was led by its passing game, and that is the biggest reason for their success over the last couple of seasons. This season, they boast the most prolific passing attack in the FBS, which averages 386.4 yards per game and also leads the nation with 42 touchdowns. The Gators are 12th in the country in scoring (41.2 ppg).

Quarterback Kyle Trask was the Heisman frontrunner until being overtaken by Jones, and he is now out to +800 to win the award. But he has had a stellar season, throwing for 3,717 yards and 40 touchdowns, both of which are tops in the country. Trask did throw two costly interceptions in last Saturday’s 37-34 loss to LSU, but he has only five total in 369 attempts this season and is completing 70.1% of his passes.

•          Alabama’s season-low in points is 38, in their season opener vs. Missouri. The Tide have scored at least 41 points in each of their last nine games.

•          Florida has scored at least 31 points in every game this season. But after averaging 45 ppg in their first six games, the Gators are averaging only 34.3 ppg in their last four games.

Devonta Smith to score 2+ touchdowns (+120): Smith was held to only three catches and 22 yards against Arkansas last week, but prior to that, he had been on fire, with 35 catches, 749 yards, and 11 touchdowns in his previous four games. He should have a big game against a defense that is tied for 78th in passing yards per game and allowed LSU freshman QB Max Johnson to have the best game of his young career.

Florida has been exciting to watch on offense this season, but have they finally met a team that can stop them? The Gators should be able to have more success against Alabama’s defense than recent opponents have had, but will it be enough to help them pull off the upset?

It can be said that the Tide have not faced too many prolific offenses on the way to their perfect record, but they got torched for 48 points and 647 yards by a potent Ole Miss offense. A key in that game was balance, as Ole Miss threw for 379 yards and ran for 268. Running the ball is not a strength for Florida, however. If they can’t find some success on the ground, it’s tough to see them being able to get it done because their defense is unlikely to get enough stops.

This one could be interesting for a while, but Alabama will march on to the CFP with an 11-0 mark, an SEC title, and a Heisman for Mac Jones.