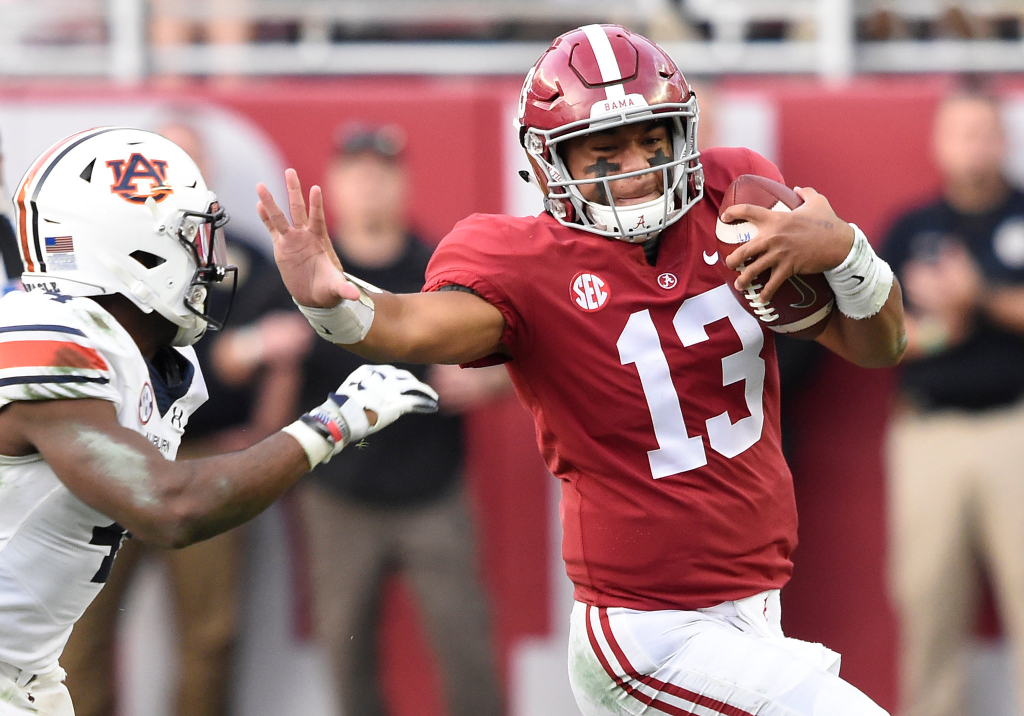 In a college football season like no other, there is a sense of familiarity: Alabama is the favorite to win the national championship. The Crimson Tide are the top seed in the four-team College Football Playoff field announced Sunday, and according to FanDuel are -160 to capture their third national title in the past six seasons on January 11 in Miami.

Alabama will face fourth-seed Notre Dame in the Rose Bowl on Jan. 1 (the game has been moved to Arlington, Texas) in one national semifinal. Second-seed Clemson, who beat the Fighting Irish for the ACC championship Saturday, will meet third-seed Ohio State on Jan. 1 in the Sugar Bowl in New Orleans. The Tigers are at +270 to win their third championship in the past five seasons, while the Buckeyes are at +500 to win it all, and Notre Dame the long shot at +1600.

The Crimson Tide (11-0) are an early 19.5-point favorite to down the Irish. The over/under for the matchup is 66.5 points. Alabama held off Florida 52-46 in the SEC championship and features three Heisman Trophy candidates in quarterback Mac Jones, receiver Devonta Smith, and running back Najee Harris.

Smith is the Heisman favorite per FanDuel at -140 after setting a school record with 15 receptions against Florida, while Jones is second at +170 and Harris is tied for fourth at +2400.

Notre Dame (10-1) could not replicate its Nov. 7 upset of Clemson on Saturday, scoring 25 points below its season average in a 34-10 loss to the Tigers. The Fighting Irish were at +2500 to win the national title in April, and the odds point to an uphill climb just to reach the championship game. Notre Dame is at +630 in the semifinals while Alabama is at -1050.

Clemson (10-1) aims for a third consecutive trip to the national title game and will have to beat Ohio State in the semifinals for the second year in a row. The Tigers open at -300 and are a 7.5-point favorite to advance, while the Buckeyes are at +235.

Quarterback Trevor Lawrence, who is third in Heisman odds at +1500, completed 25-of-36 passes for 322 yards and two touchdowns (and rushed for 90 yards and a score) in the victory over Notre Dame. Lawrence threw a 34-yard touchdown pass to Travis Etienne with 1:49 left to vault the Tigers past the Buckeyes 29-23 in last season’s Fiesta Bowl.

The Buckeyes (6-0) dealt with multiple game cancellations due to COVID-19, but shook off a sluggish start Saturday to defeat Northwestern 22-10 in the Big Ten championship. Running back Trey Sermon rushed for a school-record 331 yards and two touchdowns on 29 carries, but quarterback Justin Fields dealt with a sprained right thumb in the second half.

The Big Ten reportedly will adjust its mandatory time out of competition requirement for players testing positive for COVID-19 from a minimum of 21 days to 17 days. The Buckeyes were without several starters – including receiver Chris Olave, linebacker Baron Browning, and punter Drue Chrisman – in the victory over Northwestern.