Alabama Remains On Outside Looking In, But Still Has Great College Playoff Chance 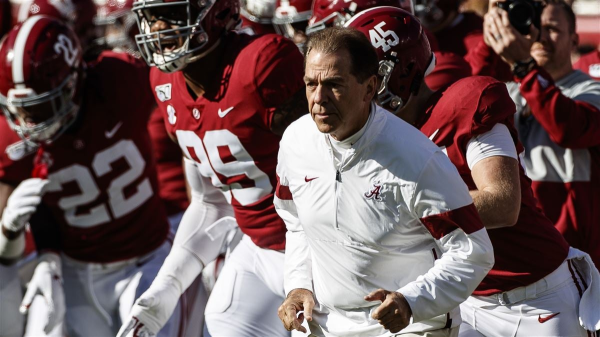 The greatest part of the college football season is finally here. Now, every game matters. Now, a loss almost certainly knocks you out of contention for the College Football Playoff. Now, some of the biggest teams in the country get set for their toughest challenges over the next few weeks.

For the No. 5 Alabama Crimson Tide, who once again sit just outside the four playoff spots, just two regular-season games remain. They can bolster their resume with wins over Western Carolina and No. 15 Auburn, but it’s unlikely they’ll compete in the SEC Championship Game.

That means the Crimson Tide will need help if they’re going to find a way into the College Football Playoff, and help will need to come in the form of a loss for one of the four teams ranked ahead of them.

To nobody’s surprise, the LSU Tigers own the top ranking in college football once again. It’s nearly impossible to argue with this ranking considering the Tigers have beaten Texas, Florida, Auburn, and Alabama.

Next is Ohio State at No. 2. The Buckeyes will face their three toughest games of the season over the next three weeks, assuming they qualify for the Big Ten title game, and it starts with a big game against No. 8 Penn State this weekend.

Rounding out the top four are the No. 3 Clemson Tigers, who should cruise through the remainder of their schedule, and the No. 4 Georgia Bulldogs. Despite their loss to South Carolina, the Bulldogs have perhaps the best resume of any one-loss team in the nation.

So, Alabama remains on the outside looking in, but it still has a great shot of getting in.

How The Crimson Tide Reach The College Football Playoff

Let’s begin by stating that there are some questions that will be asked of the CFP committee that we simply can’t know how they’ll answer.

However, assuming these current rankings matter or that No. 9 Oklahoma (9-1) and No. 6 Oregon (9-1) slip up in one of their final games, we can map out some clear paths to the College Football Playoff for Alabama.

First of all, the Crimson Tide should slip right into the top four if Ohio State loses one of its next three games against No. 8 Penn State, No. 13 Michigan, or their conference championship foe. Alabama is the first team outside the top four, and their tight loss to LSU would be better than any loss Ohio State would suffer.

The same is true for Clemson, which has a weak strength of schedule and would surely be booted from the top four with a loss to any one of its remaining opponents, leaving a place for the Tide in the top four.

But while those paths to the CFP require an upset of some kind, the final scenario does not. Because two of the four playoff spots are held by No. 1 LSU and No. 4 Georgia, who are on opposite sides of the SEC. They’ll meet in the SEC Championship Game if both teams can take care of business until then.

Here’s where it gets tricky.

If Georgia beats LSU, the Tigers would then have the same number of losses as Alabama, but LSU would own the head-to-head victory on top of a more impressive resume. In this case, LSU would still get in over Alabama.

However, the Tigers would likely be a significant favorite against Georgia, meaning the more likely outcome would be a Georgia loss. In that case, the one-loss Crimson Tide would have the edge over a two-loss Georgia, likely putting Alabama in the College Football Playoff.

Will Alabama Get In?

According to the odds, three teams appear to be locks to get into the College Football Playoff.

LSU has the best odds of getting in at -1250, largely because it would still be likely to find a place among the top four even with a loss over the final weeks of the season.

Both Ohio State and Clemson are sitting on odds of -1000 to make the CFP. For Clemson, this is largely because it will be heavily favored against every team it plays, and Ohio State has a straight shot to the playoff as well.

So, Alabama has the fifth-best odds to find a place in the College Football Playoff, but watch out for Utah to sneak in if it can top Oregon in the Pac-12 Championship Game.