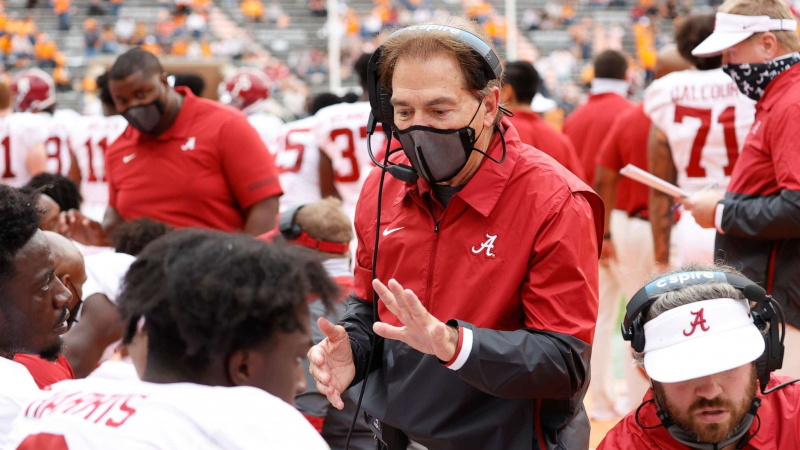 Alabama has been a dynasty in college football for years now. A big reason for the Crimson Tide’s success is their head coach Nick Saban. On Saturday, they will be without one of the greatest coaches in NCAAF history. Saban tested positive for COVID-19 on Wednesday meaning that he is unable to coach. Losing a coach might not seem like a big deal, but Saban’s record speaks for itself.

In his 25 years as a head coach, Saban boasts a 255-65-1 record. With a winning percentage at nearly 80 percent, it’s a rare sight to see Saban lose games. He also has been awarded Coach of the Year on three separate occasions. The Crimson Tide have had quite the season in 2020. They are 7-0, and prior to Saban’s positive test, seemed rather unstoppable. In their last game against Kentucky, they put up 63 points, cementing their prowess with Saban’s coaching.

Saban isn’t the only person that Alabama will be without. Junior wideout Jaylen Waddle is missing the game due to injury. This season Waddle has been great racking up 557 yards for four touchdowns.

Alabama’s offense is led by Najee Harris, who has nearly 800 yards rushing, and leads the nation with 16 touchdowns on the ground. On the other side of the ball, Auburn is led by QB Bo Nix. The sophomore has thrown for over 1,600 yards and 10 touchdowns. Nix is also able to use his feet racking up nearly 300 yards on the ground including three touchdowns.

Odds for Alabama at the Iron Bowl

The spread for the Iron Bowl currently has Alabama favored by 24.5 points according to FanDuel. Now even though Alabama is 5-1 against the spread in its last six games, one has to believe that they will struggle without Saban on the sidelines. With it being a rivalry game, it seems like Auburn will show up and play with intensity. Expect them to cover that large spread.

Also, something to pay attention to is the total for the game. Currently, FanDuel has it set at 62.5. Now that might seem quite high but with the offensive firepower on these two teams, it seems like fans will be seeing a lot of points. It wouldn’t be surprising at all to see Alabama win a 42-35 barnburner.

Finally, something that bettors will want to keep an eye on is the first half spread or Moneyline. With the Crimson Tide missing Saban, it wouldn’t be too shocking to see Auburn burst out to a lead early on in the game. The spread for the first half seems very tempting with Auburn having +105 odds to cover 13.5 points. If you are really confident in Auburn, taking the first half Moneyline will net you some major coin with the odds for the Tigers currently at +700.

This Iron Bowl will look a lot different than most years especially due to the fact that Saban will not be on the sidelines. It will be interesting to see who comes out on top.