Will the Michigan State Spartans Steal a Win over the Duke Blue Devils? 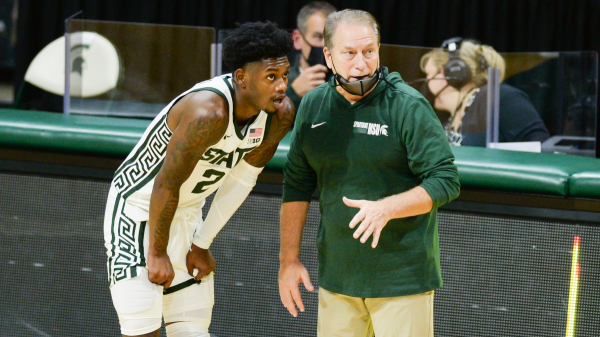 Rocket Watt to take Flight Against the Blue Devils?

The Michigan State Spartans are 0-3 in head to head meetings with the Duke Blue Devils at the Champions Classic and will be looking to snatch their first win. The Spartans defeated Eastern Michigan in their opener by 16 points and against the Notre Dame Irish by 10 points after securing 27 points second-half lead.

The world watched on as the Michigan State Spartan’s sophomore guard, Rocket Watt, came off the bench to secure 13 points and 6 assists in the win over Notre Dame on Saturday. However, his availability for today’s game is in question as he was diagnosed with an ankle injury. With his availability still in the balance, Foster Loyer will be required to step as he only mustered three points against the Fighting Irish. He, however, got attention after his 3-point shooting clinic when they went against Eastern Michigan.

Josh Langford, who missed the majority of the 2019/2020 season due to a foot injury, is back and ready to fight for his position as a vital member of the team. Last season, while he still played, he had an average of 15 points on 40.4% shoots made from beyond the arc. He also averaged 9 points per game and had an average of 2.5 assists per game.

The Duke Blue Devils were affected by Covid-19 restrictions and only had their first outing on Saturday against Coppin State. The Blue Devils lost three of their top players from a year ago, Cassius Stanley, Tre Jones, and Vernon Carey, who all transitioned to the NBA.

At halftime against Coppin State, the Blue Devils had a 17 points lead before things got uphill defensively. The game ended in favor of the Duke Blue Devils but was a close one with a 10 points differential (81-71).

Freshman forward Jalen Johnson racked up 19 points, 19 rebounds, and five assists, while guard DJ Stewart secured a team-high 24 points coming off the bench. With Freshman Henry Coleman II availability in question, the Duke will need both Jalen and Stewart to put up another prolific performance to edge out the Spartans.

Both teams have exceptional coaches leading them to the match, and this would be the first matchup between top 10 teams this season. Michigan State has a lot more experience, and the exit of Cassius Winston, Tre Jones, and Vernon Carey has not dulled the Duke’s performance level too. Duke has a young team, and they struggled against an inferior Coppin State team.

However, their defense is a solid one, and they would be bringing their best game to the pitch.