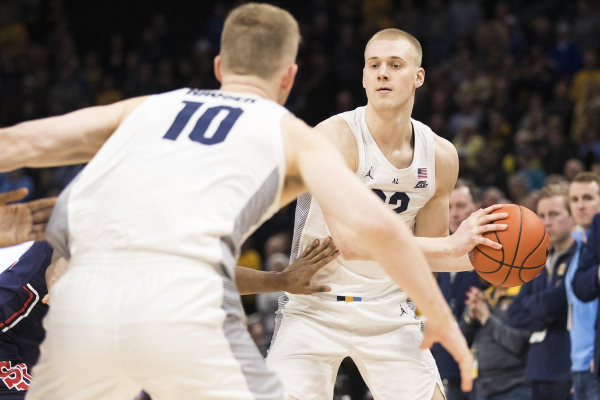 No. 4 Michigan State will be putting their undefeated 5-0 record on the line when they take on No. 18 Virginia at John Paul Jones Arena on Wednesday night. FanDuel has the Cavaliers set as slight 1.5-point home favorites.

The storyline of this college basketball game is that Joey Hauser of Michigan State will be facing his brother, Sam Hauser, of Virginia. Not only are they brothers, but they both enter the game as the leading scorers on their respective teams.

After getting off to a fast 5-0 start including a win over No. 10 Duke, Michigan State has jumped from No. 8 to No. 4 in the latest AP Top 25 rankings that were released earlier this week.

While their straight-up record may be perfect, their only 2-3 ATS as they failed to cover against Eastern Michigan, Detroit, and Western Michigan. Don’t let that deter you from betting on them against Virginia as they did win and cover against the two Power 5 opponents they’ve faced including taking down Duke as a 4-point underdog last week.

Joey Hauser has been completely dominant for the Spartans so far this season. He’s averaging a double-double with 14 points, 10 rebounds, and 2.4 assists through the first five games.

Virginia looking to make up for early loss

Virginia has something to prove entering this game as an early season loss to San Francisco as a 15.5-point favorite is still fresh in everyone’s mind. They enter this game with a 2-2 ATS record.

Defense continues to be the cornerstone of this team under coach Tony Bennett. They’re holding teams to just 57.5 points per game so far this season.

Michigan State will be their first ranked opponent they will face on their schedule.

Don’t let the early season loss to San Francisco blind you, Virginia’s defense will be the difference maker in the battle between these two ranked squads. The Spartans are averaging just 6 more points per game compared to the Cavaliers, but they’re allowing 11.1 more points on defense.

While all eyes will be on the Hauser brothers in this game, it’s what Sam Houser brings to Virginia’s offense that will be the key to their success.

Despite being arguably the best team in the ACC last season, Virginia ranked 310th in the country in 3-point shooting percentage at 30.4%. That mark has been approved all the way up to 37% so far this season which is good for 56th in the country. A huge part of that improvement can be credited to Sam Houser who’s shooting an astounding 45.3% from beyond the arc this season.

If this game does in fact come down to the wire, which the spread indicates it should, Virginia has a significant advantage at the foul line. They’re hitting their free throws at 81.2% this season while Michigan State is only hitting them at 73.6%. In a close game it’s always comforting be on the side that can hit their free throws.