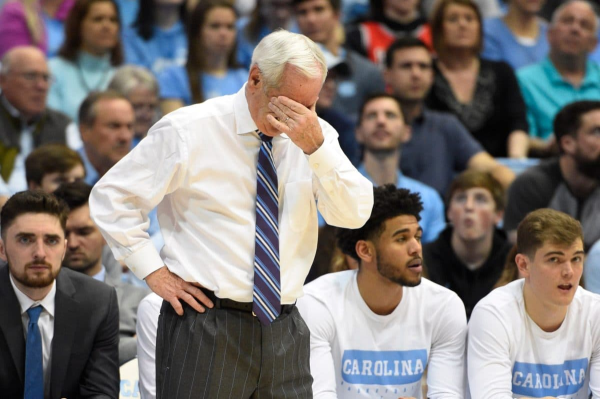 After starting the year as a preseason top 10 team, the North Carolina Tar Heels suffered their seventh loss of the season with a 73-65 defeat at the hands of Pittsburgh on Wednesday night. Now, Roy Williams will have to find a way to lead his men to the NCAA Tournament.

North Carolina is now just 1-3 in ACC play. When combined with its overall record of 8-7, the Tar Heels are easily a bottom-four team in the conference.

The Tar Heels started the year 5-0, but they’ve since fallen apart with two straight losses and six defeats out of their last eight games. On Wednesday, North Carolina crumbled in the second half to suffer another home loss against the Panthers.

North Carolina allowed three different Panthers to score at least 17 points in the contest. Trey McGowens was the dominant force for Pittsburgh, putting up 24 points, eight assists, six rebounds, and four steals in the contest. Justin Champagnie added another 22 points and eight rebounds for the Panthers.

Despite Garrison Brooks’ 21 points and 10 rebounds, the Tar Heels couldn’t hold their lead. Now, Williams has one of his toughest coaching jobs in front of him.

This defeat to Pittsburgh now marks back-to-back Tar Heel home losses to teams expected to finish in the bottom half of the ACC. What’s even more troubling is the fact that North Carolina will have much tougher games coming up in February.

That rough February slate includes contests against No. 10 Florida State, No. 2 Duke, No. 18 Virginia, and No. 13 Louisville.

If the Tar Heels have a chance to climb back into the top half of the ACC, they’ll need big improvements on the defensive end. Against Pittsburgh, North Carolina allowed its opponent to shoot 58 percent in the second half. Four days earlier, the Tar Heels allowed Georgia Tech to shoot 59 percent from the floor.

The good news for North Carolina is that it will have a chance to recover straight away as it gets set to host Clemson on Saturday. The Tar Heels are 59-0 against Clemson at home, which is the longest home winning streak against one opponent in NCAA history.

North Carolina now sits 10th in the ACC and is looking up at a huge gap between itself and the likes of 14-1 Duke, 14-2 Florida State, and 12-3 Louisville.

Does North Carolina Have A Chance In March?

What started as a team-hardening run of losses has turned into a perilous stretch of defeats that’s pushing the Tar Heels to the brink. If North Carolina wants to play in the NCAA Tournament, it will need to turn this season around quickly.

Even if Williams is able to rally this roster and find a way into the tournament, will a team that Williams himself said is the least gifted he’s coached since returning to North Carolina have a chance to reach the Final Four?
According to the odds, the Tar Heels are a massive long shot.

If North Carolina somehow reaches that point in the NCAA Tournament, it would surely be one of the most impressive coaching jobs in Williams’ career.

However, the much more likely scenario is that North Carolina finds itself in a fight to earn a tournament place come ACC tournament time.