SDSU Seeks to Extend Their Unbeaten Record Against BYU at Home 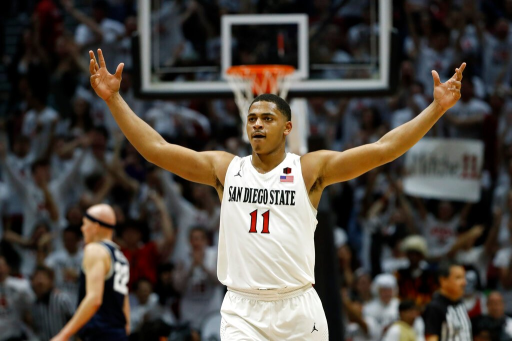 In an early-season matchup, the 5-0 SDSU welcomes the 6-2 BYU to the Viejas Arena for a Friday, 5 p.m. EST matchup. Both teams are coming into Friday’s match on the back of huge victories and will be relishing their chances of notching up a win.

In their last time out, the San Diego State Aztecs routed the Arizona State 80-68 while the BYU Cougars won 82-64 against the Utah Utes. Will the Aztecs win it at home or will the BYU Cougars give them a run for their money. Read our betting preview, analysis, and best picks for the BYU Vs SDSU game.

BYU is turning out to be a cohesive unit

The Mark Pope coached BYU (6-2) come into Friday’s match on the back of an impressive 82-64 win against the Utah Utes. In their last 3, they have won against Utah State Aggies (67-64), have been defeated at the death by Boise State (70-74), and routed the Utes last time out.

Against the Utes, BYU was in hot scoring form, and three players scored in double digits. Connor Harding led all BYU scorers with 17 points and the supporting cast of Richard Harward, and Spencer Johnson notched 15 and 16 points apiece.

Alex Barcello, BYU’s leading scorer, had a down night but still dished out a career-high eight assists. The BYU Cougars out-rebounded the Utes 44-28 and led from start to finish.

For the season, the BYU Cougars are posting 77.8 points and 39.9 rebounds per game, while allowing only 66.1 points per game. Going forward, the Cougars have been dominant, and only USC has held them to below 60 points. Will they continue their hot scoring and winning streak or will the Aztecs give them a reality check?

SDSU has not lost its spark

The No.18 San Diego State Aztecs are 5-0 for the season and come into Saturday’s match on a 5-game winning streak. They have won in double figures against all their opponents this season. They also welcome the BYU Cougars on the back of a 73-58 rout of UCLA.

Mitchell and Schakel led all SDSU scorers with 15 points, and six SDSU players notched 8 points or more to cap a dominant, all-round performance against their Pac-12 rival.

They also have a deep bench and a coach that has built a program that works. They should be a handful on Friday against a confident BYU.

SDSU will better BYU at the end

The Aztecs have not lost the consummate team effort that saw them record a 30-2 record last season. With the leadership of coach Brian Dutcher, the Aztecs have shown that they still got it this season by their dominant displays. The BYU Cougars have also been great this season, are a cohesive roaster and everyone is contributing as expected. BYU will not go down without a fight, I, however, feel that they will be helpless if the Aztecs show up and put up a monster scoring run at home. I fancy SDSU to win it outright and cover the spread at home