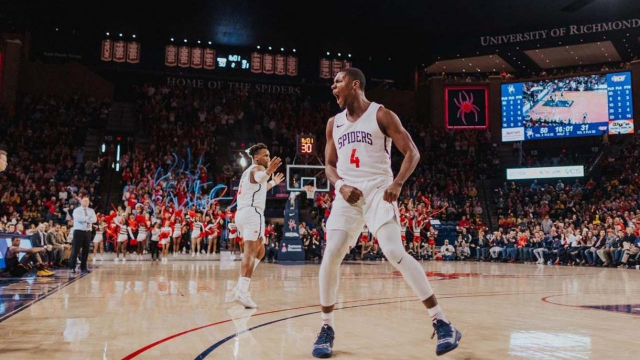 The 4-0 Richmond Spiders are set to take on the 4-1 West Virginia Mountaineers on Sunday, and one has to wonder what will happen when these two ranked teams take the court? In fact, between how evenly matched these two teams seem to be and their different strengths, this could be one of the better games to watch this weekend.

While West Virginia hit a speed bump when they lost to #1 Gonzaga by 5, they recovered and defeated Georgetown a few nights later 80-71. Keep in mind that Georgetown was the top-ranked basketball team only a brief time ago and that Gonzaga is currently in that position. This means West Virginia has gone up against some of the best teams in College Basketball and held their own the whole time.

As for the Richmond Spiders, they beat Kentucky 76-64, which knocked The bluegrass state out of the top 25. Then, they knocked off the 3-2 Wofford Terriers 77-72 and followed that up with a win over the North Iowa Panthers 78-68. If nothing else, the Mountaineers and Spiders have both faced some particularly good teams, which makes choosing between them even more difficult.

Going deeper into the numbers, gamblers will be surprised to see that both teams have similar turnover stats. For example, West Virginia has committed an average of 10.8 turnouts this season, which is only slightly more than Richmond’s 10.3 per game. As for who is better at forcing these turnovers, the Spiders sit with 8.3 steals per game while the Mountaineers have only managed 5.6 steals per game.

Another key factor in this game is rebounding, and that is something West Virginia has excelled at so far this season. In fact, throughout the first 5 games of the season, the team has an average of 42 rebounds per game. Compare that to the Spiders, who only have 32.7 rebounds per game, and you can see where the Mountaineers have a bit of an advantage.

Believe it or not, when you look at points per game by each team, both sides are virtually dead even. For example, the Richmond Spiders sit at 78.3 points per game, while the Mountaineers tout 77.8 points per game. That means this will be the battle of offensive wills and really come down to who has the better defense.

Fortunately for the West Virginia Mountaineers, they also sit with the better free throw percentage, which could be extremely helpful as the game goes on. It could even be what helps them slowly build towards an unbeatable lead in the second half, and leave the Spiders unable to come back.

Finally, let’s look at points off turnovers, which could be what this game comes down to on Saturday. While the Richmond Spiders have given up an average of 9 points per game off turnovers, the Mountaineers have given up a whopping total of 13.6 per game. In all honesty, that could end up being the biggest difference when these two take the court and lead to a victory for the Spiders.

Odds for Richmond vs West Virginia

Although the Richmond Spiders have outscored their opponents by an average of 11.6 per game, not all of those matchups were against quality opponents. West Virginia on the other hand has gone toe to toe with Gonzaga, Kentucky, and VCU, who are all heavyweights in college basketball. That’s why West Virginia looks like they have a much stronger offense at the moment.

In the end, the Mountaineers have a lot of statistics running in their favor, and those numbers are against some of the best-ranked teams If nothing else, that means West Virginia should be the easy favorite to win this game by at least 7.5 points. Of course, the Spiders are going to bring their high-powered offense to the table as well, but it could end up leading to mistakes against such a good defensive team.